This Candidate is All Over the Distric

This is Lynn Emrick. She is the Republican candidate in House District 27 — facing off against incumbent Democratic Rep. Brianna Titone — who has only been a candidate since August after winning a vacancy committee appointment to replace the GOP nominee who had dropped out of the race.

Emrick is very excited about running for the State House of Representatives. So excited, in fact, that she didn’t bother to spellcheck her own sign: 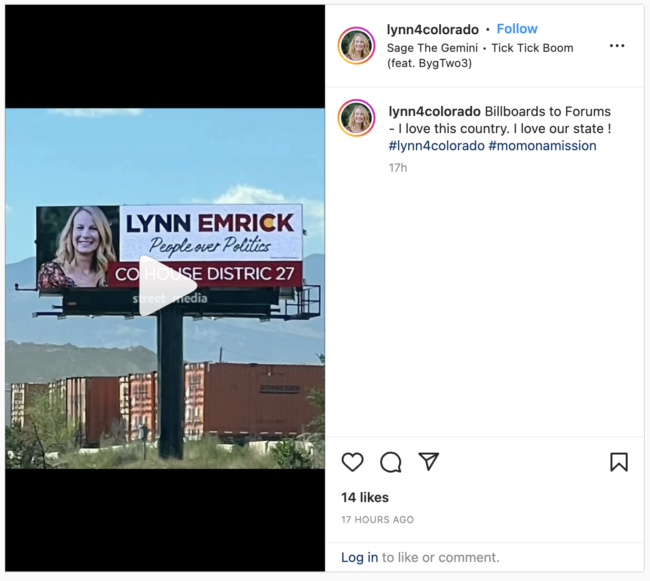 Spell it right for the ‘gram

Did Emrick not know how to spell “District,” or did her graphic designer just run out of space and hoped nobody would notice the missing ‘T’?

This also touches on a long-running irritation of ours here at Colorado Pols: Candidates who put their House or Senate district number on yard signs or literature. All candidates, no matter the political party, must stop this nonsense. Most voters don’t know the number of their House or Senate district and don’t care. It’s not like voters can pick which district they want to vote in. Your name will be on their ballot, or it won’t.

Anyway, who is Lynn Emrick? As Ernest Luning reported last month for the publication formerly known as the Colorado Statesman:

Last year, Emrick and five other moms founded Acts Academy, a private Christian school attached to a church in Wheat Ridge that enrolls children from pre-school through fifth grade, according to Facebook posts.

“We are bringing God back to the forefront of education and desire a return to foundational values that are centered on Christ and His Word, the core family service to our community and charter modeled after Jesus’ example and the fruits of the Spirit,” a promotional brochure for the school says. 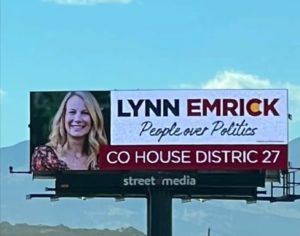 Apparently Emrick is very much influenced by the teachings of Jesus Chris.

Emrick is listed on LinkedIn as the founder of some sort of baby supply rental company (or maybe it rents babies; we didn’t really look into it). Her Christian elementary school is apparently no longer open, which probably doesn’t reflect all that well on the candidate.

According to the Arvada Press, Emrick seems to believe the “MAGA Republican” nonsense rhetoric about public school teachers turning children into drag queens, or whatever:

Emrick also pledged to “keep politics out” of the classroom and mentioned “sexualized content” and “gender identity vocabulary” as programs being taught without parental permission.

“Hidden club activities attendance without parent knowledge, teaching any sexualized content outside approved curriculum, teaching young children gender identity vocabulary, assignments or technology that contains controversial content that has not been approved without the parent’s knowledgment (sic) is out of line within our classrooms,” Emrick said.

Emrick says she wants schools to focus on teaching the basics.