The Era of Half-Assed Election Denial The election denialism trend that was sparked by former President Donald Trump doesn’t appear to be going away entirely, but at least we might have reached a stage where the election truthers aren’t trying that hard to explain their cockamamie theories.

For example, we ran across this story from the right-wing “Gateway Pundit” about alleged election fraud in a Republican Primary in El Paso County in the race for State Senate District 9. Apparently there are some folks who believe that State Sen. Paul Lundeen was only able to win his Primary Election over Lynda Zamora Wilson through some sort of unexplained computer fraud; “The machines flipped her lead to a loss,” is about as detailed as the accusation gets.

We’ll do our best to explain these allegations, since the entire story is nearly overwhelmed by tortured grammar and an absurd number of advertisements crowding the page. Wilson apparently received 52% of the vote compared to 48% for Lundeen via the caucus process, which of course means that there was no way Lundeen could have won an actual election two months later.  🙄

Anyway, according to this image on “Gateway Pundit,” Wilson was leading Lundeen throughout the night and even got the big checkmark from Fox 31 News: 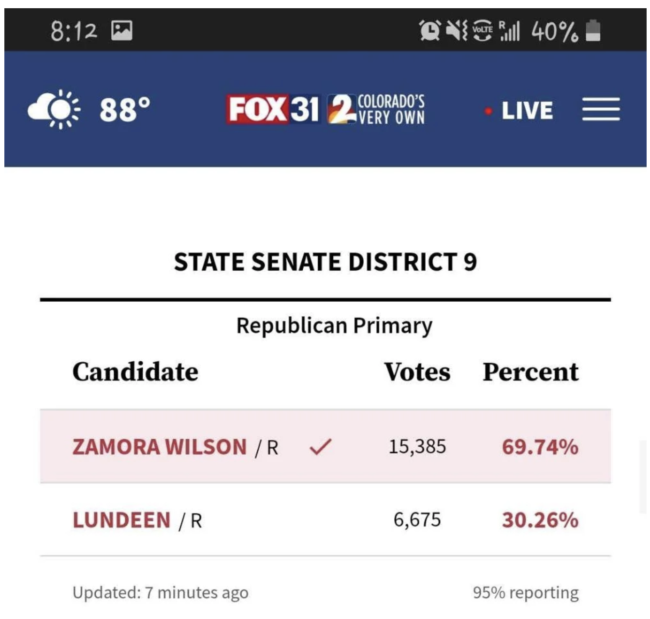 Image via “Gateway Pundit,” which may or may not even be real.

According to “Gateway Pundit”:

By 8:50 PM on election night Wilson had built on her lead and THE ELECTION WAS CALLED by Local FOX 31.

Did Fox 31 really call the race for Wilson? We have no idea…though we’re not sure why they would have bothered. Regardless, here’s what “Gateway Pundit” says happened next:

Then something very strange took place.

The election numbers were switched. Suddenly Lynda Zamora Wilson was behind in the race.

The machines flipped her lead to a loss.

The machines flipped the numbers back to the 8:15 totals — but Lundeen was now ahead!

As proof of this nefarious vote switching, the “Gateway Pundit” story presents the following image…from Ballotpedia? 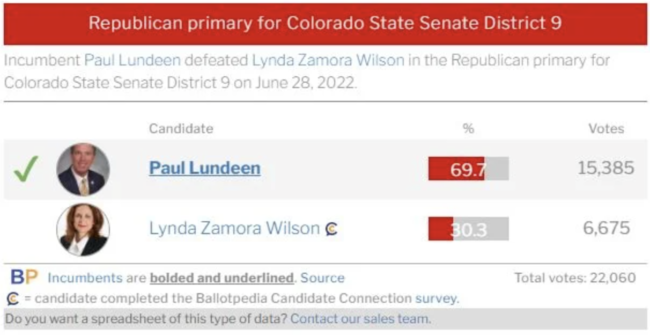 If you’re wondering how or why this is proof that the election was stolen from Wilson, we can’t tell you. Nor do we have any idea what “Ballotpedia” has to do with counting votes. For the record, here are the results in SD-9 published by the Colorado Secretary of State’s office:

Via the Colorado Secretary of State

Is it possible that Lundeen only defeated Wilson because of “the machines”? Maybe?

But here’s an alternative theory:

A political newcomer, Wilson didn’t even formally enter the race for SD-9 until March 28. She raised about $5,000 for her State Senate campaign and spent about $6,000.

We’re just spitballing here, but perhaps the more well-known candidate who actually spent a significant amount of money on the Primary Election ended up winning the race in SD-9.

Or, if you prefer, you can go with the theory that Ballotpedia took over our election machines in order to make sure Paul Lundeen prevailed in a Republican Primary Election that virtually nobody was watching for any reason.