Kristi Burton Brown (KBB) is the Chairperson of the Colorado Republican Party, which is a lot of responsibility for someone whose previous job – literally the last position she held prior to being elected GOP Chair – was serving as President of FEC United. If you’re unfamiliar with FEC United, they are an armed militia group founded by right-wing conspiracy enthusiast Joe Oltmann. Burton Brown served as the head of this militia group right up until she was elected GOP Chair in March 2021.

The reason we bring this up is to say that KBB is definitely more familiar with conspiracy theory nuttery than she is with real world campaign messaging. For proof of this, look no further than this positively idiotic narrative attempt that KBB tweeted out on Wednesday morning about Democratic Gov. Jared Polis.

Making this document public before turning off the “grammar check” on your word processor is a silly mistake that many people have made before; sadly for KBB, there is no automated way to check whether your paragraphs make logical sense aside from any grammatical errors. The text in KBB’s tweet is also difficult to read, but luckily for us, there is also an email version sent out by the Colorado Republican Party.

Let’s take a closer look at this word vomit titled “52 Times Jared Polis and the Democrats Lied or Hurt Working Families.” Why 52? Maybe to honor the number of states in America. 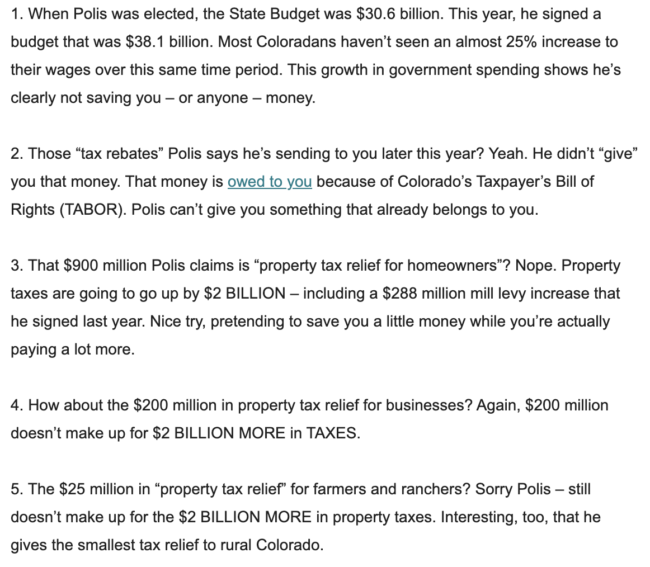 Let’s start with Point #1. Polis signed a $36.4 billion state budget, NOT $38.1 billion. Google it yourself; there are a LOT of news articles you can read. It’s generally a good idea in this sort of narrative piece to make sure that your very first point is factually accurate. Also, the state budget goes up pretty much every year because things get more expensive and Colorado adds more residents.

Point #2: Does anyone actually think that Gov. Polis is “giving” Coloradans money just for the hell of it? Republican gubernatorial candidate Heidi Ganahl is also pushing this message, but other reporters have shrugged it off because it’s dumb.

Point #3: Good idea to point out that Gov. Polis can campaign on a $900 million property tax deduction.

Point #4: Again, why are you repeating things like “$200 million in property tax relief for businesses” if the idea is to make Polis look bad?

Point #5: (Again) you’re giving Polis credit for a $25 million property tax relief measure for farmers and ranchers. But at least you repeatedly write “$2 BILLION” in all caps. That should help!

Point #7: Polis didn’t do enough to lower the cost of rent for people who are trying to purchase a house. This makes no sense.

Point #8: Repeating your previous point does not qualify as a new “point.”

Point #12: Nobody puts a slice of cheese on top of an ice cream sundae. Why? Because these things do not go together.

Also, you can do most of these things online now. You should try it.

Point #15: “Polis reduced penalties for filings on fuel taxes.” Are you sure this is really an anti-Polis document?

Point #16: Polis refused to make it okay to ignore rules and regulations? That’s your actual argument?

Point #17: Polis reduced vehicle registration fees! That was nice of him.

Point #22: You really could have saved time and combined a lot of points by just writing, “Polis refused to cut all taxes.”

Point #25: “Fees” are not also known as “taxes.” They are literally different things.

Point #26: The fun thing about this sentence is that it remains incomprehensible no matter how many times you read it.

Point #30: Polis “exempted fertilizer from sales and use tax”! That was nice of him, but we do agree that it doesn’t do much to increase his “cool” factor.

Point #33: Polis didn’t say something nice about Burlington, Colorado that one time he was asked? You should definitely make an entire television ad about this.

Point #34: “Polis gave a tax credit to corporations who [sic] use ‘alternative transportation’”! That was nice of him. Also, you did the gas tax thing like 8 times already.

Point #39: We absolutely agree that it sounds good that it is “nearly free to register to start a business in Colorado.” Thanks, Gov. Polis!

Maybe the rest of this paragraph made more sense before you wrote it down.

Point #41: We solved the problem of school shootings? 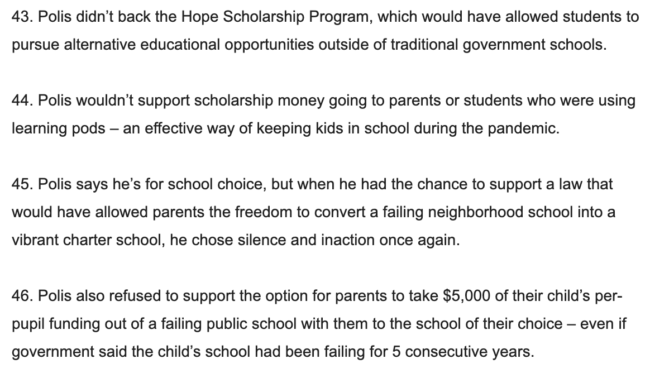 Point #43-46: You could have just said, “Gov. Polis does not support school vouchers,” which would have saved a lot of space and still been a true statement.

Point #52: Governor Polis is not a judge. You are correct.