Nobody Knows Better Than Colorado How Big Oil Spins Lies

As the Colorado Sun’s Mark Jaffe reports today, three years after the passage of Senate Bill 19-181, legislation reforming the Colorado Oil and Gas Conservation Commission’s mission to prioritize public health over fostering growth of the oil and gas industry, the full effects of the law are becoming apparent. And contrary to the dire warnings from the industry and their Republican allies in the General Assembly that this legislation would “shut down oil and gas in Colorado,” nearly two thousand new wells are moving forward under the new rules this year:

The demise of the oil and gas industry in Colorado — predicted after the passage of legislation and regulations focused on protecting public health, safety and the environment — does not appear to be imminent.

Plans for nearly 1,900 new oil and gas wells are before the Colorado Oil and Gas Conservation Commission in 2022 — some already approved and others in various states of review.

In order to understand the full context of the debate over this legislation, it’s necessary to go back to 2019 when SB19-181 was originally passed and signed into law. Reforming the COGCC’s mission to prioritize public health was a longstanding goal of newly-elected Gov. Jared Polis, who had personal experience with oil and gas drilling adjacent to his property. Colorado Republicans, badly smarting from their historic defeat in the 2018 general elections, hyped this proposed legislation with the industry’s help into what they sold to voters as a mortal threat to the oil and gas industry. The principal political casualty of this effort was former Rep. Rochelle Galindo of Greeley, who resigned under the threat of a recall for which SB19-181 was (at least in polite company) the stated reason. 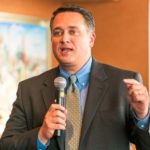 Dan Haley of the Colorado Oil and Gas Association.

A year after the SB19-181 was passed, the COVID-19 pandemic sent oil prices into the negative as storage costs exceeded the value of the product. This indeed brought oil and gas drilling effectively to a halt in Colorado. But in July of 2020, the Colorado Oil and Gas Association’s Dan Haley actually suggested that SB19-181 was worse for the industry than then pandemic.

In truth, after the high water mark of the Galindo recall, opposition to SB19-181 began to fall apart as the industry realized (and was forced to be honest with investors) that the legislation would not destroy the oil and gas industry in Colorado after all. When the price of oil rebounded this spring over $100 a barrel, so did production in Colorado.

And today, the very same Dan Haley who claimed SB19-181 was worse for the industry than a global pandemic says everything is cool:

“We are hopefully getting to a spot where things are workable,” said Dan Haley, CEO of the Colorado Oil and Gas Association, one of the state’s industry trade groups. “Oil and gas companies are learning what’s expected of them.” [Pols emphasis]

So, not worse than COVID then. That’s great! Except, of course, for the years he spent saying otherwise. In a world where attributes like honesty and credibility have value, anyone who lies to your face to this egregious an extent should never again be considered a trustworthy source. But we don’t live in that world, and as surely as Sarah Huckabee is going to be the next governor of Arkansas, Dan Haley will most likely suffer no credibility penalty with the local press for his outrageous falsehoods. And that’s a shame, because few issues are subject to more misinformation today than the price of gas. Do you really think someone who wanted you to believe SB181 hurt the industry more than COVID is going to be honest about why gas prices are so much higher today than the last time oil hit $100 a barrel?

And yes, we know a lot of readers are waiting for us to acknowledge the disappointment among environmentalists that SB19-181 didn’t come closer to the industry’s dire predictions. The reality is that this legislation was never intended to shut down the oil and gas industry, but to reform its practices and prioritize public health–goals that should be laudable even among those on the left who want more. In the industry’s clamorous and factually indifferent opposition to SB19-181, the extreme difficulty of passing even incremental reforms becomes apparent.

Right now, the high cost of gas is central to the Republican Party’s midterm election message–and the forecast is that they’ll take at least one chamber of Congress this fall with it. They’re counting on voters to do the oil and gas industry’s dirty political work.

The rebuttal to that, at least in our state, is simple: no one has lied to you like the oil and gas industry.