We’re monitoring an intraparty spat that exploded into public view today between the Republican candidates running in the primary to compete in November for Colorado’s new CD-8 and their supporters, some of whom are set to meet tomorrow at Denver’s Grizzly Rose for debates featuring most of the big 2022 races called the “Republican Rumble.” 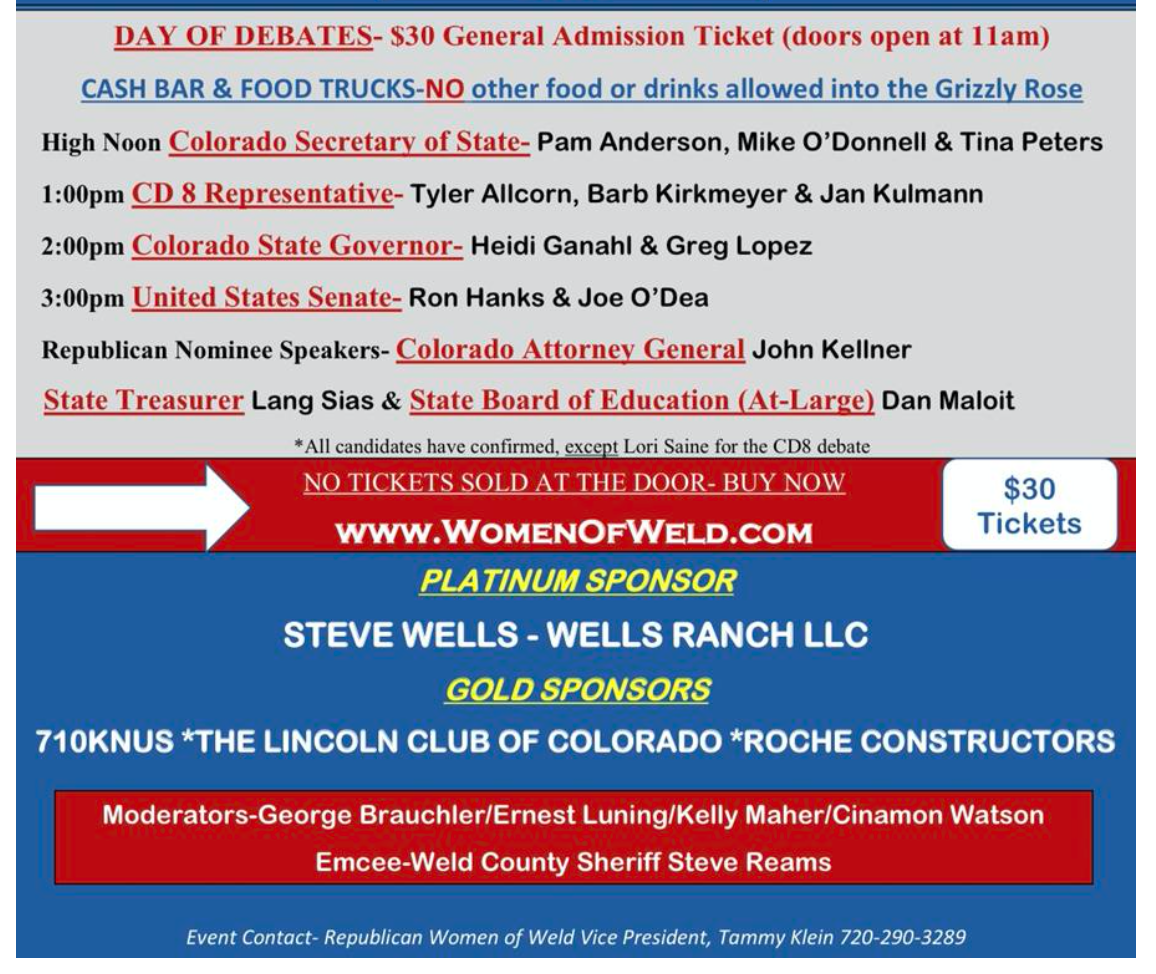 As you can see, all of the candidates for the principal contests this year are represented with what appears to be the sole exception of Weld County Commissioner Lori Saine running in CD-8. From what we can reconstruct externally, it appears that Saine did belatedly request to be included in the CD-8 debate, and her request to be included was supported by Saine’s opponent Jan Kulmann.

And that’s where it gets interesting:

I just asked to be pulled off this part of the program because this disingenuous bullshit is so infuriating I am no longer an objective moderator. If someone can’t respond to an invite with A MONTH’S NOTICE they should take responsibility. This desperate pivot is gross -> https://t.co/TLUAskIFu9

This is one of the “moderators” of event’s debates, longtime local GOP minor celebrity Kelly Maher, irate beyond any rational explanation over the idea that Lori Saine should be allowed to take the stage with the other CD-8 candidates. Anytime a public figure’s over-the-top outrage boils down to “they didn’t RSVP on time,” you can be pretty confident there’s an ulterior motive at work. Kulmann, at least in this moment, is sticking to the high road:

I don’t like this insider game. @lorisaine could’ve responded sooner, but she should be on the debate stage, period. I’ve told debate organizers as much. Barb’s entire campaign has been cashing in 30 years of political favors. This is one more example. #copolitics @Kirkmeyer4CO https://t.co/P9lQ462r1F

So what’s really going on here? First and foremost, the local GOP establishment is broadcasting their fear of Lori Saine and preference for Barbara Kirkmeyer, who is by far the most establishment-connected of the three candidates. Saine’s fiery conservative rhetoric and inside knowledge of Kirkmeyer’s negatives sharing Weld County home turf pose a major threat, and the best we can figure is that Kulmann’s campaign advisor and wannabe Republican kingmaker Josh Penry sees value in Saine tearing into Kirkmeyer while Kulmann skates above the fray.

Though not without a parting shot from Kulmann’s spox:

There is no pivot. Jan has said repeatedly – every candidate should be on stage. Barb Kirkmeyer threw a fit because that’s what entitled career politicians do. And the career politician got her way. This is about the voters, not the insiders.

No matter what happens at tomorrow’s “Republican Rumble,” Lori Saine has already succeeded in making the event all about her whether she’s allowed to take the stage or not. It wouldn’t surprise us if Saine deliberately kept the organizers of this event waiting for her RSVP in order to precipitate this last-minute drama over including her. Insiders may seethe, but that’s also what’s known as good politics.

As for Jan Kulmann, we’d be very careful about trying to use Lori Saine as either ally or leverage. We understand the theory, but the risk is that Saine takes sufficient advantage of Kulmann’s “sympathy” to actually win the primary. Ask yourself the honest question: who speaks for the Republican base today? The answer is clearly Lori Saine.

In today’s GOP, establishment howling only reinforces the point.