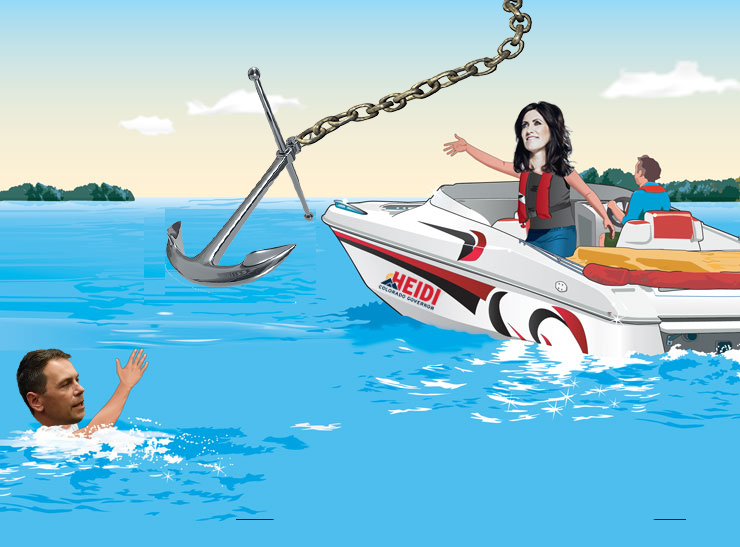 But the reverse can also happen, which is what Colorado Republicans have experienced in recent election cycles and seem destined to deal with again this November. Republican gubernatorial candidate Heidi Ganahl was recently a guest on KHOW radio (with Ryan Schuiling filling in as a guest host on The Leland Conway Show), where she proceeded to make a big splash that drenched several other unsuspecting Republicans.

After listening to Schuiling drown for a full minute while trying to downplay national polling showing widespread support for abortion rights, Ganahl was asked about the Reproductive Health Equity Act (RHEA) passed by the state legislature. Here’s her response:

GANAHL: Well, I mean, right, it’s disgusting. I don’t know any, um, many other moms – and I’m a mom of four – that believes that this is okay. We fight like crazy to keep our kids safe and the thought of, you know, letting a child die after birth…or giving birth and letting a child die, is abhorrent to the majority of women I know.

And so, I think we should do every single thing we can to overturn that law, and as governor I will fight to do that. Hopefully I’ll have the legislature to help me do that as well, and a good Attorney General – um, go John Kellner! [Pols emphasis]

You’ll want to add this to your playlist:

Here’s the audio of Ganahl’s entire response on the question, which concludes with her statement that incumbent Democratic Gov. Jared Polis is destroying the State of Colorado.

Ganahl’s extreme position on abortion rights is not a new revelation — she has regularly talked about reversing RHEA but won’t say if she would back legislation to restrict abortion rights — but this is the first time we can recall that Ganahl also tossed this live hand grenade to other Republicans in the legislature and to Republican Attorney General candidate John Kellner.

Perhaps Kellner is completely on board with efforts to overturn RHEA and/or rollback abortion rights in Colorado, but we’d imagine he’d prefer to answer that question himself. Ditto for other Republican candidates running for State House or State Senate in a state where voters overwhelmingly support abortion rights.