Gino Campana is a Ft. Collins businessman seeking the Republican nomination for U.S. Senate for the right to challenge incumbent Democratic Sen. Michael Bennet (D-Denver) next November. We haven’t mentioned Campana much in this space because, frankly, there isn’t a whole lot to discuss.

Campana launched his campaign in October with an online video that seemed more like a commercial for Ancestry.com than a political spot. His general narrative seems to be that he is a moderate-ish Republican businessman who is able to form sentences on his own. Campana’s big claim to fame is getting appointed to something called the Public Buildings Reform Board by former President Donald Trump — an offer that came literally within the final month of the Trump administration and thus never materialized into a real job. 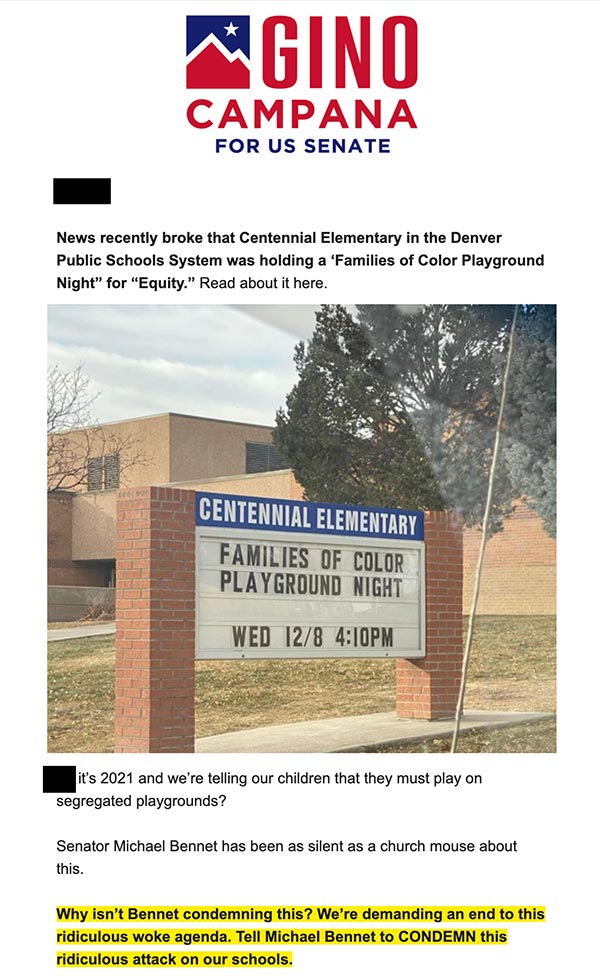 Thus far, Campana has been trying to navigate inside a space that is not quite “raving lunatic Big Lie advocate” but also allows him to avoid the dreaded “RINO” label (during an interview with right-wing radio host Peter Boyles in October, Campana used about 10,000 words to — sort of — answer the question, “Did Trump win the 2020 election?”). Because nobody seems to be paying much attention to his campaign, last week Campana launched a new narrative effort targeted at Bennet that will only make a modicum of sense if you watch a crapload of Fox News.

Campana recently sent out an email to supporters calling on Sen. Bennet to condemn some thing that happened at some school in Denver that only got right-wing media attention because of a poorly-worded sign.

According to a Fox News story (via Yahoo!) from last Friday, an anti-critical race theory group called Parents Defending Education filed a civil rights complaint after Centennial Elementary school in Denver tried to do a thing:

Centennial had a sign announcing its “families of color playground night.” Earlier this week, the school defended the event in a statement provided to Fox News. “Our school leaders met with some of the Black families whose children attend our school to determine ways for these families to feel more included in our school community,” the statement said.

“Some of these families shared with us that, since the only time many of them see one another is at drop-off and pick-up times, we host some events where Black families can meet one another, connect with one another and share their experiences about the school with one another. We are honoring their request. All families are welcome to attend all of our events, and families from a variety of backgrounds have done so.” [Pols emphasis]

Campana jumped on this “woke segregation” and finagled his way onto the Jimmy Lakey Show in order to somehow blame this on Bennet:

What does this have to do with “segregation”? Absolutely NOTHING. But here’s how Campana attempts to connect the dots:

CAMPANA: [Bennet] is in a unique position to comment on this because he was the superintendent of Denver Public Schools. And these teachings didn’t happen overnight. It happened over a course of time, and he was there 15 years ago, and perhaps the seed was planted 15 years ago or six years ago.

Before being appointed to a vacant U.S. Senate seat by then-Governor Bill Ritter, Bennet served as the Superintendent of Denver Public Schools for about three and a half years (2005-09). According to Campana, the poorly-worded sign outside Centennial Elementary school is all part of a sinister plan that Bennet set in motion “15 years ago or six years ago,” and Bennet’s refusal to discuss this matter is proof that he is complicit in a broader effort to allow families of different racial backgrounds to meet together on a school playground.

Look, we get what Campana is doing here: He’s attempting the same tactic that many of his Republican brethren have used for several years. In this case, the general formula is to use the word “woke” in a sentence about brown people so that you can attract support and a few bucks from ignorant racists. But Campana could appeal to the same breed of supporter by merely repeating QAnon conspiracies alleging that Bennet drinks fresh baby blood while riding around on a unicorn with Chelsea Clinton. This is a silly attack designed to appeal to the lowest common denominator of Republican voter in Colorado.

Serious candidates for serious political offices don’t spend significant chunks of time scribbling out nonsense on an etch-a-sketch board. That Campana even thinks that he can (or should) do this is a pretty strong indictment of his abilities as a politician.

If you’ve been wondering what to make of Campana as a candidate for U.S. Senate, you now have your answer.