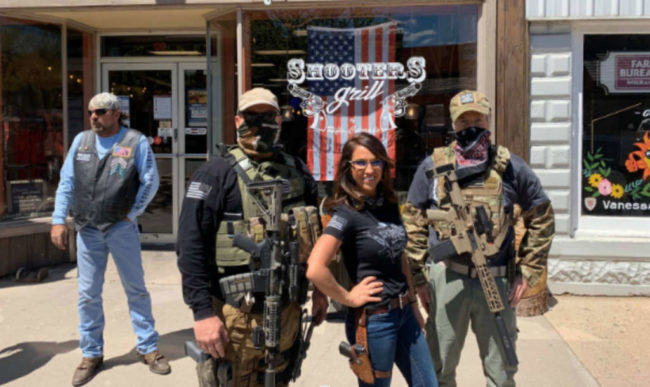 Pfluger said in an interview that he wanted to host a rally with Boebert because she’s a gun-rights activist and they’ve both signed on to pieces of legislation regarding Second Amendment rights.

“She’s a champion for that issue and I want to make sure that people here in Midland, Texas, and all throughout Texas know there’s many people fighting these battles, that we’re doing it together as a team, and that we’re going to protect that right for all Americans,” he said.

Rep. Pfluger, who we keep wanting to call Rep. Pfizer but we’re sure he would not approve, kept his comments about the importance of the Second Amendment relatively tame. As is her trademark, however, Rep. Boebert was much more direct:

Boebert, who owns a restaurant in Rifle, Colorado, called Shooters Grill where staff open carry, touched on several other topics during the rally besides gun rights. She criticized Biden’s “tyrannical authoritarian regime,” his policies on immigration and Afghanistan and his administration’s decision to put fences around the U.S. Capitol building, which Boebert called the “People’s House.”

Walk through this with us: if Joe Biden presides over a “tyrannical authoritarian regime,” in the present tense, doesn’t that mean the Second Amendment has not in fact protected Americans “against all of this tyranny, all of this authoritarianism that we are seeing right now?” Because it’s either that, or what Rep. Boebert is saying is that the Second Amendment hasn’t protected us…yet.

Which should make anyone who has lived through the last year of American politics uncomfortable.

There was a time, fairly recently in fact, when Republican candidates who made not-so-veiled appeals to violence by invoking the Second Amendment were pilloried for it–think 2010 Nevada failed GOP U.S. Senate candidate Sharron Angle and her thoughts about “Second Amendment remedies” to problems the ballot box doesn’t resolve to one’s liking.

In 2021, what was once over the line is now increasingly the party line.