Get More Smarter on Thursday (Sept. 16)

Happy Mexican Independence Day. Please celebrate responsibly. Let’s Get More Smarter. If you think we missed something important, please include the link in the comments below (here’s a good example). If you are more of an audio learner, check out The Get More Smarter Podcast. And don’t forget to find us on Facebook and Twitter.

► As The Colorado Sun reports, there’s a new proposed congressional redistricting map out for discussion:

The latest draft of Colorado’s congressional map avoids putting the state’s current U.S. House members into the same district, while creating a sweeping district across most of the Western Slope and southern Colorado. The new 8th Congressional District in the north Denver metro region would be nearly 39% Hispanic.

The new map released Wednesday groups most of the Western Slope and southern Colorado into a single, L-shaped 3rd Congressional District. Northwest high-country counties including Routt, Jackson, Eagle, Summit and Grand are grouped with Larimer and Boulder into a proposed 2nd Congressional District. And the new districts would no longer pit Garfield County Republican U.S. Rep. Lauren Boebert against Democratic U.S. Rep. Joe Neguse of Lafayette.

And the proposed 7th District, now centered in the north and west metro area, would include much of Jefferson County but stretch to South Park in the central Rocky Mountains.

This new map is not without problems, as The Sun notes:

Morgan Carroll, chair of the Colorado Democratic Party, disputed the congressional commission’s formula for determining the political competitiveness of a district.

“Measuring competitiveness by focusing on strong years for one party and ignoring 2014 — which was a strong year for the other party — is simply wrong,” Carroll said in a statement. “As a result, this could very likely end up a 4-4 map after the midterms, which is in no way reflective of Colorado voters.”

The Independent Congressional Redistricting Commission will debate this new map tonight. If at least eight votes can’t be garnered, the nonpartisan staff will produce a third proposed map on Sept. 23. CLICK HERE to see Congressional Map #2.

In other redistricting news, the Colorado Secretary of State’s office is investigating potential illegal lobbying activity committed by a handful of well-known Republican operatives. The Colorado Times Recorder also has the full video of a ham-handed presentation that Republican Rep. Matt Soper gave to several Republicans in July.

► Republican Heidi Ganahl announced her campaign for Governor on Tuesday and is off to the worst start for a statewide candidate in recent memory.

A day after Heidi Ganahl, the newly minted GOP gubernatorial candidate, refused to tell reporters whether she thought the last year’s presidential election was legitimate, Wadhams said Republicans won’t be “credible in a general election” unless they say the election was not stolen.

“I think candidates ought to look at the reporter and say, ‘I do not believe the election was stolen. I do not believe we should ban 1.6 million unaffiliated voters from voting in the primary.’ And I think we just ought to take a stand on this because it’s defining our party,” Wadhams told Peter Boyles.

“I honestly think we’ve got to have strong candidates who were willing to say, no, the election was not stolen because that’s the only way they can be credible in a general election.”

You know Republicans are worried about Ganahl’s campaign when they immediately start blaming the media for her troubles.

► The Denver Post reports on a significant new finding from the Colorado Attorney General’s office:

The department’s officers persistently arrested and injured Black individuals and other people of color at higher rates than white residents, according to the investigation released Wednesday.

The department’s training and accountability structures are inadequate and create a culture of violence, according to investigators’ 112-page report.

Anyone who has been paying any attention to Aurora in the last couple of years will not likely be surprised by this report. Attorney General Phil Weiser wants to create a consent decree to allow his office to work with the Aurora PD on making widespread reforms.

► As Denver7 reports, ICU capacity in Colorado hospitals has reached its lowest levels of the COVID-19 pandemic.

► Congratulations to Gov. Jared Polis, who on Wednesday was wed to longtime partner Marlon Reis in a small outdoor ceremony in Boulder. Polis and Reis have been together for more than 18 years and are the parents of two children, ages 7 and 9. 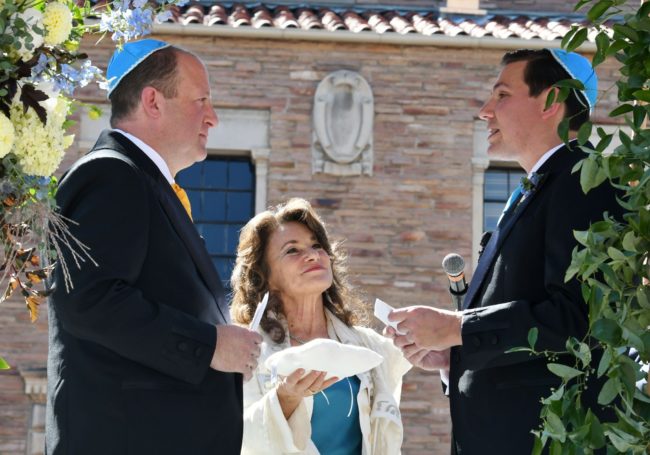 ► Former Trump confidante Roger Stone was served on Wednesday in relation to a civil lawsuit stemming from the January 6 insurrection. As The Washington Post reports:

Stone being served in the lawsuit comes ahead of the Saturday rally of demonstrators supporting those arrested in the Jan. 6 attack on the U.S. Capitol by Trump supporters trying to overturn President Biden’s election victory. Capitol Police have requested the support of the National Guard on Saturday if events get violent. The perimeter fence around the Capitol will also begin to be reinstalled Wednesday night, according to an email sent to Senate staff and obtained by The Washington Post’s Ellie Silverman. The fencing was erected after the failed security response in January and stayed until two months ago.

► Former Democratic AND Republican Sen. Ben “Nighthorse” Campbell has endorsed Republican Eli Bremer for U.S. Senate in 2022. If you are younger than 40, this will likely be completely meaningless to you.

► Democrat Yadira Caraveo continues to rack up some impressive endorsements as a candidate for Congress in the still-to-be-determined Eighth Congressional District.

► Colorado needs to do more to strengthen and clarify laws against child abuse, as 9News reports:

On Wednesday, the Child Protection Ombudsman (CPO) of Colorado called for several changes to the laws around reporting abuse that would make the process clearer and more efficient for mandatory reporters.

In a seven-page brief, Ombudsman Stephanie Villafuerte explains how the decades-old law is often confusing for the people it is supposed to guide through the process of reporting abuse…

…The brief references a recent and high-profile case. Olivia Gant was only 7 years old when she died in hospice care, after years of medical treatment now believed to be unnecessary and harmful.

Her mother, Kelly Turner, is facing murder charges. Medical records show an internal debate between her caretakers at Children’s Hospital Colorado, where, during the last few months of her life, some employees started to question if Gant’s situation was a case of abuse.

► Many Colorado Republicans are still very excited about QAnon nonsense.

► Colorado’s Pitkin County is returning to mandatory indoor mask requirements as of today.

► As Colorado Newsline reports, the United States is fatter than ever before. We’re at least doing a little better here in Colorado.

► Michael Booth of The Colorado Sun explains how Climate Change is already affecting you in Colorado.

► The City of Denver’s budget is bouncing back, baby!

► Can we be done with the recalls yet?

► As POLITICO reports, Florida Gov. Ron DeSantis is cozying up to anti-vaxxers as he tries to maintain his political standing among conservatives despite his awful job of managing the COVID-19 pandemic.

► A Democratic state lawmaker in Michigan is in trouble after allegedly bringing a handcuff key into a jail.

► Dana Milbank of The Washington Post dissects the anatomy of a Republican lie — one that can be indisputably dismissed as complete fiction.