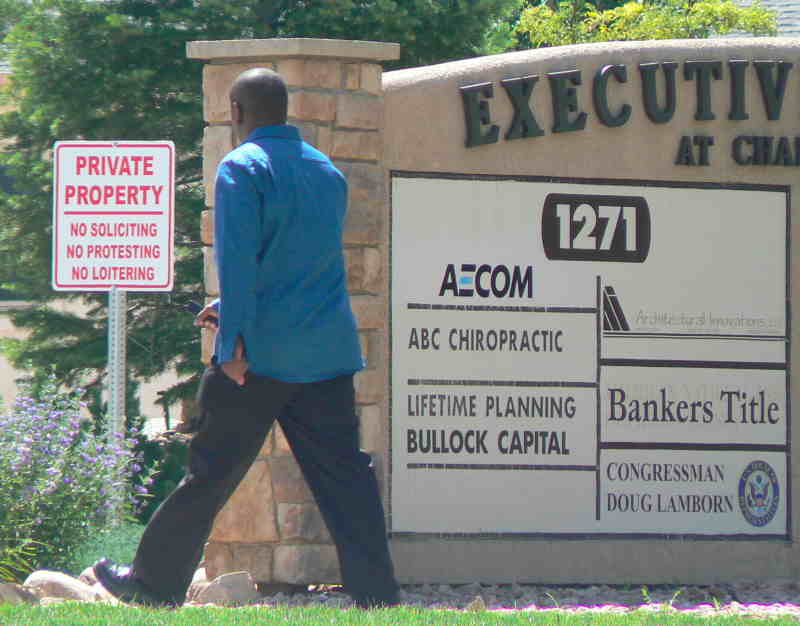 Supporters of embattled Republican Representative Doug Lamborn are coming to his defense, rallying for the congressman outside of his Colorado Springs office Friday afternoon.

Backers of Lamborn say that the comment has overshadowed the positive aspects of the congressman and his career.

Moveon.org and other liberal groups have protested outside Rep. Doug Lamborn’s offices a couple of times in the last few weeks, both related to Lamborn’s unfortunate “tar baby” comments about President Barack Obama, and general demonstrations regarding the recent debt-ceiling controversy. Lamborn hasn’t received the grassroots attention that freshman Reps. Cory Gardner and Scott Tipton have, but it’s apparently been enough for his office to put up a “NO PROTESTING” sign–that’s really what it says–next to the sidewalk (H/T Not My Tribe).

Evidently that does not apply to pro-Lamborn demonstrations.

Bottom line: as odd as a rally in support of the “embattled,” nonetheless ultra-safe Lamborn sounds, we suppose we can understand why his staff “supporters” would want to throw one. But the permission they apparently needed detracts a little from the spontaneity.