Thanks Tucker: Maskholes Rage At School Boards Across Colorado 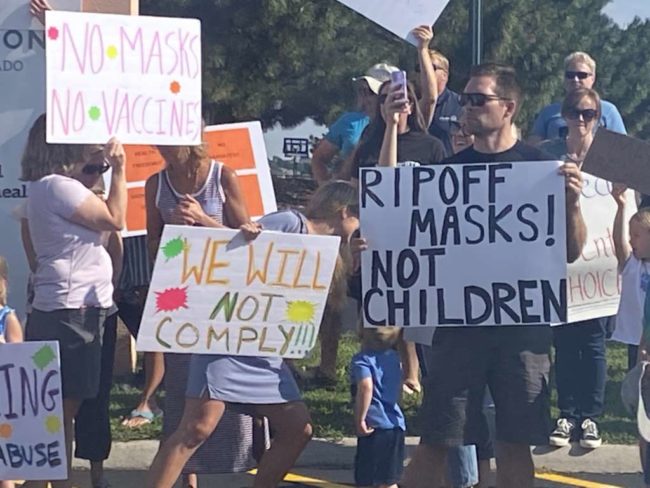 As the Denver Post’s John Aguilar reports from Jefferson County, misplaced anger over differing decisions by school boards across the state regarding mask-wearing by students and staff indoors this school year is boiling over into a fresh round of misguided protest:

About 300 parents — many with kids in tow — spent Wednesday morning protesting Jeffco Public Schools’ decision to require students ages 3 to 11 to wear masks in classrooms to start the upcoming school year.

Standing outside of the Jefferson County Public Health headquarters in Lakewood, parents chanted “my body, my choice” and held signs decrying last week’s decision by the state’s second-largest school district…

Last week, the Jefferson County school district said in a news release that it was requiring masks for children up to 11 years of age because that age group is not yet eligible for the vaccine. It also said county public health officials made it clear that they would be enforcing quarantine guidelines when school starts Aug. 17 and the district wants to avoid as much disruption from kids who become exposed to the virus. 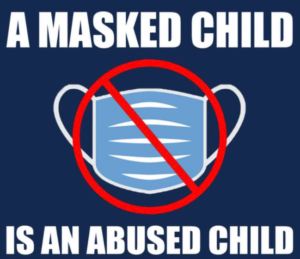 In conservative Douglas County in the Denver metro’s exurban south, masks will not be mandatory except on school buses where they’re federally mandated–but even the decision to recommend wearing masks is being met with parental outrage as CBS4 Denver reports:

“I am not doing this!” shouted one woman.

Wise said the decision to recommend and not require mask wearing was in line with guidance from the Centers for Disease Control and Prevention and Tri-County Health Department. 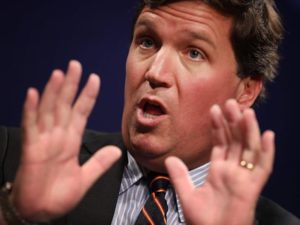 In Larimer County, as the Fort Collins Coloradoan explains, the mask mandate Poudre Valley Schools will require this year reflects a change from the guidance issued this summer, and that’s because the pandemic has changed:

In late July, PSD announced it did not plan to enter the school year with a mask mandate but said it would be “mask-friendly” and recommended them for unvaccinated students and staff.

At the time, PSD included the caveat that safety protocols “could become more restrictive, depending on how COVID-19 conditions may change in our county and PSD community over time.”

And that’s just what happened…

No one is happy that the Delta variant of COVID-19 is prolonging a pandemic that has already done immeasurable economic harm in addition to killing over 600,000 Americans. But it’s even worse for the millions of Americans who have been taught by conservative media outlets that the entire pandemic was overblown, that vaccines still proving miraculously effective at preventing and lessening the severity of infections are dangerous–and most recently that children being required to wear masks is “child abuse” as Fox News host Tucker Carlson recently told his millions of viewers.

With cases skyrocketing once again and new data showing the virus can still be spread by vaccinated people, protecting the biggest remaining involuntarily unvaccinated population of kids too young to get the shot should be a no-brainer. Just like getting the vaccine as soon as it was available to eligible Americans months ago, wearing masks for the last year they were mandated, staying home during stay-at-home orders, not freaking out on waiters and flight attendants who tell you to pull your mask up over your nose…

All those things we apparently aren’t civilized or patriotic or just plain smart enough to do anymore. At the end of the day, we submit that our kids are more negatively impacted by the horrible example of senseless adults holding out against common sense than any consequences of wearing a face mask indoors a little bit longer.