Get More Smarter on Friday (July 23) 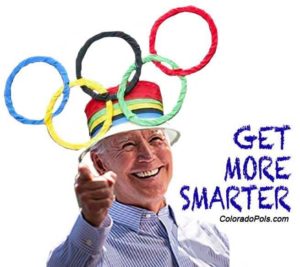 The 2021 Tokyo Olympics are officially underway. Let’s Get More Smarter; if you think we missed something important, please include the link in the comments below (here’s a good example). If you are more of an audio learner, check out The Get More Smarter Podcast. And don’t forget to find us on Facebook and Twitter.

► More and more Republicans are speaking out about the importance of receiving your COVID-19 vaccinations. One such Republican, Alabama Gov. Kay Ivey, is even starting to get a little salty about it. From CNN:

Alabama Republican Gov. Kay Ivey on Thursday called out “the unvaccinated folks” for the rise in Covid-19 cases in her state, a remarkable plea at a time when many GOP leaders are refusing to urge people to get vaccinated even as Covid-19 cases surge in many parts of the country.

Alabama is the least vaccinated state in the country, with roughly 33.9% of residents fully vaccinated, according to data from the US Centers for Disease Control and Prevention. Average daily Covid-19 cases in Alabama are nearly double what they were a week ago, and more than four times higher than they were two weeks ago…

…The unvaccinated, Ivey said, are “choosing a horrible lifestyle of self-inflicted pain.”

“We’ve got to get folks to take the shot,” she continued, calling the vaccine “the greatest weapon we have to fight Covid.”

► The Denver Post reports on the Front Range stop for Secretary of the Interior Deb Haaland, who will be in Grand Junction today for discussions about the future of the HQ of the Bureau of Land Management:

The federal government intends to provide immediate assistance to water users impacted by the West’s historic drought and develop longer-term strategies to respond to climate change, U.S. Secretary of the Interior Deb Haaland pledged Thursday during a visit to Denver.

Haaland — flanked by Assistant Interior Secretary for Water and Science Tanya Trujillo, U.S. Rep. Diana DeGette, D-Denver, and Denver Water CEO Jim Lochhead — spoke to the press after meeting with state and local officials at the Denver Water Administration building to discuss collaborating on addressing climate change and water-related issues in the West.

Haaland said the Bureau of Reclamation is working to identify and disperse “immediate financial and technical assistance for impacted irrigators and Indian tribes” while also tackling longer-term climate change responses, including building more resilient communities and protecting the natural environment.

“Being from New Mexico, I know how much climate change impacts our communities, from extended fire seasons to intense drought and water shortages, and I know how important the Colorado River Basin is to these discussions,” Haaland said.

► The House of Representatives approved a measure — by wide margins — sponsored by Rep. Jason Crow (D-Aurora) that seeks to help Afghan interpreters who assisted U.S. forces in Afghanistan in obtaining visas to come to the United States; the Taliban has pledged to hunt down and kill interpreters who remain in that country.

Crow’s legislation passed the House by a vote of 407-16. Colorado Rep. Lauren “Q*Bert” Boebert was the ONLY member of Colorado’s delegation to vote “NO.”

► Colorado Newsline reports on passage of legislation in the House of Representatives that would regulate “forever chemicals” also known as PFAS, which can cause serious health problems when circulating through water supplies.

► Disgraced former Missouri Gov. Eric Greitens is now running for U.S. Senate, and some Republicans worry that his shameless efforts to get an endorsement from Donald Trump might actually work. If Greitens ends up winning the GOP nomination for U.S. Senate in Missouri, it could open the door for a Democrat to pick up that seat.

► The Colorado Sun looks at whether the state’s redistricting commissions might be granted extra time to finish drawing new district maps:

The consequences of failing to adopt final maps by the end of the year could echo into 2022. In a brief submitted Thursday to the Supreme Court, the Secretary of State’s Office said the court must adopt final maps before the end of 2021, or else require the June 28, 2022, primary election be pushed back.

Approving maps any later would jeopardize the whole 2022 election calendar.

“This is because administering the earliest stages of Colorado’s elections is akin to carefully positioning a domino set — after the first have begun to fall, it becomes virtually impossible to shift later deadlines without imperiling the remainder of the election calendar,” according to the secretary of state’s brief…

…To complicate their pilot run, the U.S. Census Bureau will be more than four months late in releasing the final, detailed population data, which will now arrive on or after Aug. 16.

That would give nonpartisan redistricting staff two weeks to crunch the numbers and draw new maps before the Sept. 1 constitutional deadline for congressional maps to be delivered to the Supreme Court. It would be “physically impossible” to meet that deadline if the census data arrives any later, Jeremiah Barry, a legislative attorney advising the commissions, said earlier this month.

► Colorado Newsline reports on a new legislative task force that will try to assist with the state’s housing crisis.

► As Denver7 reports, offers of a free $100 gift card to Walmart are convincing some unvaccinated Coloradans to get their arms jabbed.

► Colorado Public Radio has the latest on flooding in Poudre Canyon.

► The so-called “Qanon Shaman” needs help. A lot of help.

► The Denver City Council keeps doing everything they can think of to weaken Denver’s Mayor.

► Denver officials are considering a proposal to raise fines for businesses that violate public health orders.

► POLITICO reports that advisers to former President Donald Trump are looking at potential running mates in 2024. Former Vice President Mike Pence is not invited to this party.

► The husband of Denver District Attorney Beth McCann has pled guilty to attempted arson charges in Grand County in the latest step of a very strange saga.

Congressperson Lauren “Q*Bert” Boebert’s obsession with AOC is both weird and sad:

Rep. Madison Cawthorn vows that if the GOP gains control of the House in 2022, he will “make sure that consequences are doled out” to Dr. Anthony Fauci: “We want to prosecute this guy to the full ability of the law.” pic.twitter.com/kFN0rGOCGJ

► A new study from two researchers in Colorado finds that angry rhetoric from politicians tends to make voters more angry and reactive in response. There’s no truth to the rumor that these scientists will next try to find out if fire is indeed hot.

► The House Freedom Caucus wants Minority Leader Kevin McCarthy to find a way to remove Democrat Nancy Pelosi as Speaker of the House (SPOILER ALERT: It doesn’t work that way).

► Democratic candidates in 2018 and 2020 promised to reduce health care costs for Coloradans. They’re doing it in a big way.