Sympathy For The “QAnon Shaman?” 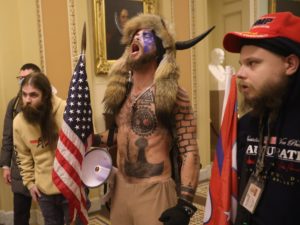 One of the more recognizable figures among the 550+ suspects arrested for alleged crimes committed during the January 6th insurrection at the U.S. Capitol attempt to disrupt the certification of Joe Biden’s victory in the 2020 presidential election is the man who’s become known as the “QAnon Shaman” for his bizarre buffalo headdress costume and Mel Gibson-style cries of “freeeeedooooom” that echoed through the halls of the Capitol that day. Two weeks ago, Jacob Chansley was transferred to the FCI Englewood federal prison in Denver’s southwest suburbs for a psychological evaluation in order to determine his fitness for trial after months of pre-trial detention since his arrest in January.

As Reuters reports today, the “Qanon Shaman” is a deeply disturbed individual:

The participant in the Jan. 6 U.S. Capitol riots nicknamed the “QAnon Shaman” is negotiating a possible plea deal with prosecutors, after prison psychologists found he suffers from a variety of mental illnesses, his attorney said.

In an interview, defense lawyer Albert Watkins said that officials at the federal Bureau of Prisons, or BOP, have diagnosed his client Jacob Chansley with transient schizophrenia, bipolar disorder, depression and anxiety.

The BOP’s findings, which have not yet been made public, suggest Chansley’s mental condition deteriorated due to the stress of being held in solitary confinement at a jail in Alexandria, Virginia, Watkins said.

“As he spent more time in solitary confinement … the decline in his acuity was noticeable, even to an untrained eye,” Watkins said in an interview on Thursday.

First and foremost: confirmation that this individual suspect in an insurrection thousands of people participated in urged on by then-President Donald Trump is seriously mentally ill does not excuse the actions of anyone else. The thorough and unsparing investigation to hold everyone who broke the law on January 6th accountable reflects the seriousness of the crimes committed that day, and is supported by an overwhelming majority of Americans.

The presence of a person suffering from severe mental illness in this crowd of agitated criminal extremists cannot be considered unexpected. Furthermore, the psychological harm done by solitary confinement is very well known here in Colorado, where corrections officials in recent years have eliminated long-term solitary confinement entirely.

Even in a case of insurrection, what makes America great is how we treat even the least deserving of sympathy fairly. The “QAnon Shaman” should be punished, and it does appear that he has been. What he may need more at the end of the day, though, is treatment.

“QAnon Shaman” himself may go down in history as more of a sad mascot than a bonafide threat, but that doesn’t mean we should get complacent about the very real and enduring threat of more violence from Trump dead-enders. It’s the sound of mind who smashed their way into the Capitol, and the man who incited them to violence in the first place, who should not walk free.