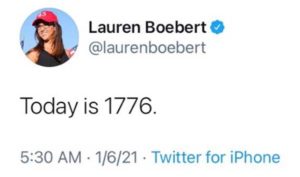 Today is July 6, which marks six months since the insurrection at the U.S. Capitol on January 6, 2021.

Last week, The New York Times published an exhaustive video review of the events of Jan. 6 that should be required viewing for every American. On Monday, The New York Times published an interview with Illinois Rep. Adam Kinzinger in which the four-term Republican called out Colorado Rep. Lauren “Q*Bert” Boebert for her role that day. Kinzinger says that he wants to know what Members of Congress knew about the insurrection prior to the events of Jan. 6, which leads to this question and answer:

Do you suspect that some members of Congress were aware of what was going to happen that day and supported it?

I won’t name names, but yes, I do have that suspicion. I will say, if you just looked at Twitter — the whole reason I brought my gun and kept my staff home and told my wife to stay in the apartment was looking at Twitter. I saw the threats. When Lauren Boebert — I will call her out by name — tweeted “Today is 1776,” I don’t know what that meant other than this is the time for revolution. [Pols emphasis] Maybe it was a dumb tweet that she didn’t mean. Fine. I’ll give her that credit for now. But if you have members of Congress who were involved in nurturing an insurrection, heck yeah, we need to know.

Boebert’s “Today is 1776” Tweet was viewed by critics as an open call for revolution. As the editorial board of The Denver Post wrote on January 14:

U.S. Rep. Lauren Boebert’s words and actions before, during and after the Jan. 6 attack on the U.S. Capitol were dangerous.

We can say with certainty that her words on Twitter, in interviews and on the floor of the U.S. House supported the lie that the U.S. election was fraudulent and that Democrats were stealing the election from President Donald Trump. Without those lies, we believe there would not have been an insurrection, and U.S. Capitol Police officer Brian D. Sicknick would still be alive.

Boebert has since defended her messaging referencing 1776, claiming in a response to a proposed House Ethics complaint that “It is an expression of my pride for America’s Founding Fathers, the Declaration of Independence, and the establishment and endurance of this great country.” Judging by the comments made by Rep. Kinzinger, this is not an explanation that has been widely accepted.

Boebert has also continued to claim that the 2020 Presidential election was stolen from Donald Trump. At a Trump rally last week, she even made that clear from her place in the audience:

Rep. Boebert just yelled “you won” as Trump was talking about the election.

Trump: “it is a shame what happened”

Last month, Boebert was one of only 21 Republicans in the House of Representatives — and the only member of Colorado’s delegation — to vote AGAINST awarding the Congressional Gold Medal to U.S. Capitol Police Officers. Her explanation of that vote was as vapid as most of her comments on the subject.