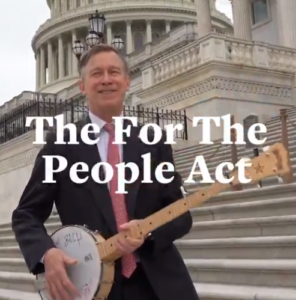 Another recent jam from Sen. Hickenlooper

The headline here is intentionally snarky.

You might remember about a year ago at this time, then-Senate candidate John Hickenlooper was getting gouged by Democratic Primary challenger Andrew Romanoff and friends for Hick’s purported lack of commitment to Democratic policies. Nevermind, of course, that Hickenlooper campaigned on a progressive agenda centered around building partnerships and helping everyone do better in our economic system.

Since Hickenlooper entered office as Colorado’s junior U.S. Senator in January, the former Governor has been doing basically what he said he would do — which (again) was to be a Democratic Senator. The latest example of this comes via press release from Hickenlooper’s Senate office:

Many states, including Colorado and New Hampshire, already have local collective bargaining protections for emergency personnel, but federal law does not protect these essential workers. In 16 states, public safety employees cannot collectively bargain for safe working conditions. In five states, they are unable to unionize altogether.

“Firefighters and emergency personnel look out for our safety every day, and it’s time for the federal government to look out for theirs,” said Hickenlooper, Chair of the HELP Subcommittee on Employment and Workplace Safety. “This bill guarantees their right to negotiate for healthy working conditions and a living wage.”

There he goes again: Fracken-collective-bargaining-looper.

We didn’t intentionally write this to sound like a “told you so” argument, but it kinda ended up there in the end.