Boring Boebert Makes Fool of Herself at Border 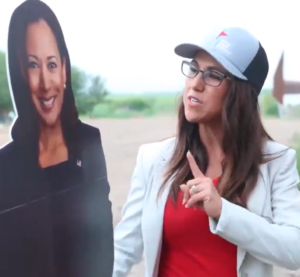 Don’t bother watching. This is the whole schtick.

Congressperson Lauren “Q*Bert” Boebert (R-ifle) has become little more than a living, breathing cliche. Boebert’s brand of politics is “Performative Obstruction,” which largely entails two things: 1) Being opposed to anything that Democrats suggest, and 2) Yelling about any one of a handful of predictable social issues of which she has little to no understanding.

Boebert defeated incumbent Rep. Scott Tipton in a 2020 Primary because she presented a new, more interesting caricature of a politician at the same time that Tipton had basically stopped trying to appeal to voters in CO-03. Her gun-toting, smack-talking persona did enough to convince voters in a heavily-Republican district to support her in the General Election, and she has continued that simple shtick into Congress.

On Tuesday, Boebert released a new video on social media that follows a familiar formula. She struts around near an unfinished section of wall along the U.S./Mexico border firing off silly one-liner attacks about how the Joe Biden administration somehow created an immigration crisis out of thin air (nevermind that immigration has been a significant issue for every Presidential administration of her lifetime). Then comes the “big reveal”: Boebert is shown carrying a cardboard cutout (SO CREATIVE!) of Vice President Kamala Harris. The message is that Harris — and therefore the Biden administration — is not doing enough to address the issue of undocumented immigrants because Harris is not standing around at the border pointing at stuff.

So what exactly is the Vice President doing at the moment? As The New York Times reports:

During her first foreign trip as vice president, Kamala Harris said the United States would bolster investigations into corruption and human trafficking in Guatemala, while also delivering a clear, blunt message to undocumented migrants hoping to reach the United States: “Do not come.”

Ms. Harris issued the warning during a trip that was an early yet pivotal test for a vice president currently tasked with the complex challenge of breaking a cycle of migration from Central America by investing in a region plagued by corruption, violence and poverty.

While President Biden campaigned on unwinding some of the Trump administration’s border restrictions, allowing migrants to apply for asylum at the U.S. border, Ms. Harris amplified the White House’s current stance that most of those who crossed the border would be turned away and would instead need to find legal pathways or protection closer to their home countries.

Vice President Harris was in Guatemala on Monday, where she met with President Alejandro Giammattei. Today, Harris is in Mexico to meet with President Andrés Manuel López Obrador. As CNN reports, Harris is actually working on the immigration issue in a manner that seems more likely to produce results than merely taking a field trip to a fence:

… The vice president and her staff have made it clear that they want to focus narrowly on diplomatic efforts in Mexico and the Northern Triangle countries of Guatemala, Honduras and El Salvador, where they believe they are more likely to achieve tangible results in addressing the root causes of migration, like economic despair, according to two White House officials familiar with the dynamic.

As you can see, Boebert’s message is a silly as her visual. Plagiarizing “Cardboard Cory,” the downfall of former Sen. Cory Gardner, demonstrates an embarrassing lack of creativity. That she is doing so while Vice President Harris is at the same time meeting with regional leaders to discuss the immigration issue is the cherry on top of this turd cake.

This is all very dumb and repetitive, but worse for Boebert, it’s BORING. Boebert isn’t even six months into her term in Congress, and she’s already run out of material. Joe Biden…blah, blah…border crisis…blah, blah…Kamala Harris…blah, blah…look at this fence…blah, blah, blah.

Boebert has already demonstrated that she has no interest or aptitude for actually, you know, governing, so she can’t afford to be running out of ideas for political stunts. The next 18 months is going to be a real slog.