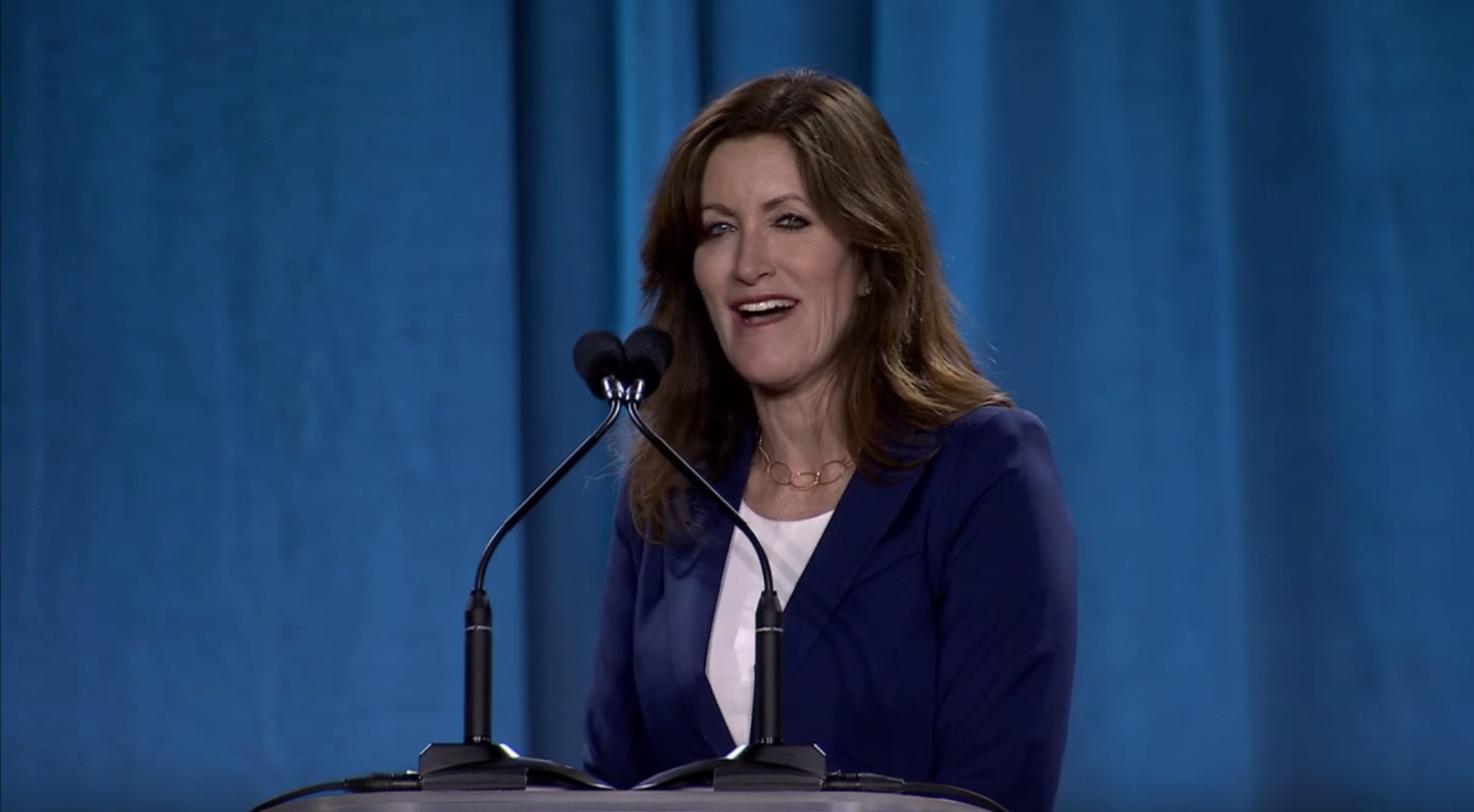 By Gabrielle Bye, for the Colorado Times Recorder.

And she’s about to launch a new podcast for which she’ll travel around Colorado and interview “folks who embody the true spirit of the Rocky Mountains.”

Does Ganahl’s sudden flurry of activity indicate her desire to make a bigger name for herself in advance of a campaign for statewide office in 2022?

That’s the question I posed to several political analysts and commentators in Colorado–and signs point to a likely run, they told me.

Eric Sondermann, a longtime political commentator, believes that the decision to launch a podcast after already landing a column is a definite move to increase her profile to Coloradans–and that wouldn’t hurt if she decides to run for another statewide office.

“I don’t think she just decided to write a column and produce a podcast out of the blue. I think they’re part of a conscious strategy to increase her profile,” Sondermann told the Colorado Times Recorder. “So she may or may not run, and I suspect she’s a little way away from a formal announcement, but I think these are clearly and unambiguously early steps to at least put herself in position where something like [running for statewide office] might be possible.”

Pollster and political analyst Floyd Ciruli believes that Ganahl is a top contender to run for another statewide position in 2022.

“She would be a front-runner for almost any position in the state, and one of the few people that would have some statewide credibility,” Ciruli told the Colorado Times Recorder. “…With both Republicans, and I would say–I don’t think the public knows her that well–but what I would say would be the ‘attentive public.'”

Likewise, Sondermann reiterated the idea that Ganahl is highly regarded within the GOP, giving her a good chance to run for something next year, even if nothing is concrete yet.

“I think the surmise in many political circles is that Heidi is preparing a run for high office,” Sondermann said. “There are many Republicans who regard her as the next great hope in a state where there haven’t been many Republican hopes of late.

“I have no inside knowledge, I haven’t chatted with her, and she probably wouldn’t tell me even if we did chat,” he continued. “But the speculating in political circles is that she’s eyeing the governor’s office, and a lot of prominent Republicans are eyeing her for that race.”

Additionally, Ganahl, as a female entrepreneur in an education role, also gives her an advantage, says Ciruli.

“I think being a woman would also help; being involved in education, I think, is very positive for her,” said Ciruli. “I know Republican leaders are often putting together panels or speaking groups, and they almost always like to have her and recommend her. So I think my opening statement that she would start in a very good position is true.”

An uphill battle in Colorado

Ganahl would face a difficult path if she decides to run against Gov. Jared Polis (D-CO), say analysts, due to his popularity in a state that’s rejected all statewide Republican candidates since Ganahl won in 2016. Colorado Sen. Cory Gardner (R-CO) lost his statewide seat last year to Democrat John Hickenlooper, leaving Ganahl as the last statewide Republican standing.

“This is becoming an increasingly blue state. Add to that that it’s hard to defeat incumbents. It’s closing on half a century since Colorado turned out an incumbent governor,” said Sondermann. “So it’s a heavy lift against Polis, but I think she is, at this point in time–April in the odd year between elections–she’s at least doing her best to keep her options open.”

“The real question is,” said Ciruli, “…can a Republican take this on, given the recent track record at least since 2018, which brought, as you know, the Democrats to every constitutional office in the state, and was reinforced by Cory Gardner, and the president doing so poorly in 2020? So, that’s the difficult road.”

That being said, Ganahl still has a fighting chance, Ciruli believes.

“Being the governor is not an easy job these days,” Ciruli said with a chuckle, pointing to yearly polling during the onset of the pandemic, when Governors Cuomo and Newsom were popular. “…Now, [governors] are just struggling, and Mr. Biden is at maybe 54% popularity. Mainly because they had to make so many difficult decisions, and this pandemic has not gone away. It keeps resurging and disappearing, and of course, we’re so polarized over whether you want to wear masks and whether we should close things down. So I do think the governor has some vulnerabilities, because he’s been the governor in a very difficult time.”

Ciruli also suggested that some pandemic points of contention, like whether or not to open the schools, can give Ganahl a platform to run on.

Compared to other members of the GOP who are easily categorized as extremists, Ganahl carries a more moderate image, both analysts said.

“That may be the benefit of being a regent, which is seen as a little less partisan, even though we all know obviously that there are Democrats and Republicans [on the board],” Ciruli said.

But Ganahl hasn’t articulated specific policy positions that reflect moderation, and she has no record of criticizing the Republican Party’s right-wing flank.

In fact, when it comes to publicly supporting Donald Trump–easily the biggest wedge issue currently dividing the GOP–Ganahl parts ways with the moderates.

In nominating arch-conservative Ken Buck to lead the Colorado Republican Party, Ganahl declared that Republicans “are on the right side of history.”

“It’s time to get to work to re-elect President Trump, to re-elect Senator Gardner, and to win back the state legislature,” she said in the speech.

Ganahl has largely deflected questions about her political aspirations and positions.

KCOL talk show host Jimmy Lakey asked Ganahl in February if she had any plans to take on any statewide positions next year, and Ganahl artfully danced around that question.

“Well, I am going to do all I can to get the message about the policies we support; the way we want to represent the Republican Party in Colorado. I think we’ve got some great people on the bench and in the House and Senate in Colorado and I think we’ve got some good ideas about how to solve a lot of these problems,” Ganahl told Lakey. “Hopefully we can get a voice and get some collaboration going and it’s not just a one-sided approach to solving the problems of Colorado.

“But I’m all in, and I am ready to do all that I can to help solve the problems of this state. We’ve got a lot of ’em, and we’ve gotta get our kids back to school for one, we’ve got to get our businesses open and as an entrepreneur, that’s a whole ‘nother ball game.”

Ganahl didn’t respond to a call seeking to know about the websites, her political plans, or whether her support for Trump could be a deal-breaker for Colorado voters.

Ganahl, who was elected in 2018 and finishes her role as regent in 2022, has previously been a big advocate for allowing more free speech on CU campuses and specifically encouraging conservative viewpoints.

To push back against the alleged liberal atmosphere of CU, she’s advocated for mandatory civics courses at CU; created a now-defunct organization called the Free to Be Coalition to help organize debates and conservative gatherings on campus; and has praised the CU Benson Center, which hosts conservative scholars and speakers via private funding.

The latter has landed her in some hot water. She called Benson Center visiting scholar John Eastman “fantastic,” despite his history of racist views based on “birther” arguments.

Eastman was stripped of his classes and public duties for the remainder of his time at CU after speaking at a Trump rally in January to spread election fraud myths, and after the New York Times reported that he tried to persuade former Vice President Mike Pence to block election results.

At CU, she’s also been a strong advocate to lower tuition rates for students and/or get tuition reimbursements to students for the time they spent in online courses, which received heavy pushback from other regents, including a Republican on the board.

She’s also given mixed signals on sexual assault and harassment on campus. At a Lincoln Club luncheon in 2019, she acknowledged the gravity of the epidemic of sexual assault at CU, while simultaneously miring herself in the narrative that women regularly lie about sexual assault:

“Twenty-eight percent of students at CU said that they had been sexually assaulted, but it included all kinds of things like inappropriate touching, and catcalling, etc, etc,” said Ganahl. “I think the actual rape number was nine percent […] it’s still nine percent too many. But you know, that’s self-reported, so.”

Ganahl sees her business have serving a political function.

She once described one of her enterprises, The SheFactor, which helps young women, as a way to deliver conservative talking points without appearing too partisan or political.

“It’s also a way for us to give young women a different message than they hear in the media, in entertainment, and in education. You better bet we are talking about free markets, free speech, individual rights, personal responsibility, all those things that we’re so passionate about,” said Ganahl last year. “We’re just not doing it as an overt political organization. But we’re making sure that happens and that those conversations are happening.”

In the political arena, Ganahl continues to be active, speaking to many groups.

She was co-chair for the No on CC campaign, which would have increased education and infrastructure funding, by loosening TABOR rules. CU President Mark Kennedy, a Republican, opposed Ganahl on this issue.

She also has been a vocal opponent against a public health option in Colorado, which would drastically lower health insurance costs for rural Coloradans.