After a tense final 24 hours to the legislative session, House Republicans blinked first in a high-stakes game of chicken over a payday lending amendment to an essential rule review bill.

The decision by the House GOP, following a long day of negotiations, will allow the state to avoid an expensive special legislative session that would have been called by Gov. John Hickenlooper had the rule review bill not been passed…

After meetings with Hickenlooper, McNulty and the House GOP caucus took up the bill around 6:15 p.m. and, after a short speech, adopted a motion by Rep. Bob Gardner, R-Colorado Springs, to recede from its earlier position and adopt the Senate bill without the payday lending amendment.

Gov. John Hickenlooper is pretty much universally getting the credit for ending this, and his blistering of Republican hides in the most explicit terms we’ve seen since he took office is a big reason why this battle turned so spectacularly against Speaker Frank McNulty.

Who is, bipartisan lip service aside, the unconditional loser.

WEDNESDAY UPDATE #4: Senate votes to adhere to their version of Senate Bill 78. “Payday payback” amendment stripped from the bill, which now goes back to the House. One Republican, Sen. Ellen Roberts, broke with her caucus and voted to adhere to the original version.

Now the decision to convene a $21,000-a-day special session to decide the fate of the “payday payback,” or not, rests with Speaker Frank McNulty and his House GOP caucus.

By taking this bill hostage, McNulty has shown that he cares more about predatory lenders than the well-being of Colorado teachers, oil and gas producers, hunters, the poor or the elderly. Frank McNulty is standing up for predatory payday lender organizations while making Colorado citizens feel like they’ve been slapped with a wet leather glove.

WEDNESDAY UPDATE #2: Amended “payday payback” Senate Bill 78 passes House on a party-line 33-32 vote. Last night, Tim Hoover of the Denver paper reported that Democratic Reps. Ed Casso and Sue Schafer, sponsors of the earlier failed House Bill 1290 “payday payback,” were originally on board with this amendment, but sensibly backed away as the controversy grew. The lone Democratic vote yesterday in favor of the amendment from Rep. Rhonda Fields was reportedly made in error–and wasn’t repeated today.

WEDNESDAY UPDATE: Numerous sources now reporting that a special session to deal with the House GOP’s last-minute “payday payback” amendment to the rules review bill is a real possibility–the Senate has no plans to adopt this amendment, and will reportedly adhere to their original version. If the House doesn’t back down from their brinksmanship on behalf of payday lenders, hundreds of critical rules in this bill on a daunting range of issues will expire.

UPDATE #3: Press release from House Democrats explaining the situation, as well as the consequences if the rules review bill isn’t passed, after the jump. Says Minority Leader Sal Pace, “Shame on the Republicans for hijacking this straight-forward and very necessary bill for their special interest cronies. This is the wrong way to end the session.”

UPDATE #2: Gov. John Hickenlooper’s office steps in, according to the Denver paper via Twitter, calling the payday loan amendment to the rules bill an “irresponsible” “poison pill.” The consequences of not passing this normally routine rule reauthorization are actually quite serious–literally hundreds of rules are reauthorized in SB-78. Gov. Hickenlooper is saying unequivocally that he won’t subsidize this high-pressure, last minute tactic to hold all of these rules hostage.

UPDATE: We’re hearing, and evidenced by a procedural vote a short while ago, that House Democrats are not playing ball with this “backdoor attempt” to subvert payday loan rules–that includes Democrats who co-sponsored HB-1290, the failed original “payday payback” bill.

Speaker Frank McNulty, the House Republicans, and maybe a few Democrats are up to mischief on behalf of payday lenders–right now–as the Colorado Independent reports:

The payday lending industry isn’t giving up on this legislative session in Colorado. Lawmakers who have failed at several attempts to roll back regulations passed last session limiting high payday interest rates and fees are now reportedly planning to attach to a bureaucratic rule-making bill an amendment that would thin the payday regulations. The legislative session ends at midnight tomorrow.

The bill, Senate Bill 78, is this year’s version of an annual bill that extends all the rules and regulations passed by the legislature. It’s a fairly formal exercise but the bill also includes a list of rules and regulations the legislature chooses not to extend. Rep. Bob Gardner, R-Colorado Springs, is leading the charge for the payday industry, introducing the amendment that would add the payday regulation laws passed last year to the list.

It’s a bold- some would say brazen- strategic move, given that payday industry arguments have been voted down time and again and in light of the fact that there is so little time to debate the issue. Indeed, the point seems to be to avoid debate… 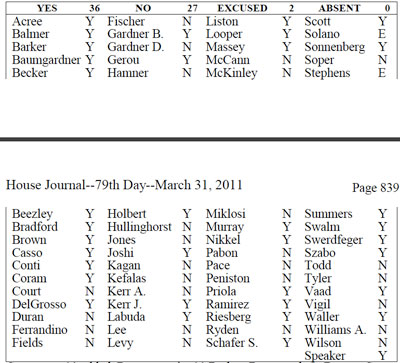 Whatever debate there will be is presently underway, we’ll update when we receive more information. And in our continued quest to give payday lending spammers the middle finger, we promise to highlight front and center every legislator who supports this effort and their connection to the industry.

Payday lenders have failed twice in the last two years, and we’ll be sure to keep a spotlight on all last-minute efforts to ram their agenda through again. As a reminder, here’s another look at how your Representatives voted on the last effort.

(Denver) – This evening House Republicans jammed an amendment onto SB11-078, the General Assembly’s annual rule-review bill, to undo fair rules regulating the payday lending industry.  The move was a shameless special interest giveaway in the last hours of the 2011 legislative session, and one that could ultimately undermine core and critical functions of government and public safety.

The rule review bill requires executive branch agencies to submit new or amended rules to the Office of Legislative Legal Services.  The statute directs staff to review the rules to determine whether they are within the agency’s rulemaking authority.  The staff performs rule review under the direction of a legislative committee, the Committee on Legal Services.

If the rule review bill is not passed, rules promulgated during the previous year would expire on May 15th of this year.  This in turn would threaten the most basic functions of Colorado government; everything from controlling Colorado’s greenhouse gases to annual hunting seasons would be in peril.

If the bill passed with the payday lending handout, the Senate could adhere to their original position, which would then send the bill back to the House.  At that point Republican leadership would have to decide between doing the right thing by stripping the amendment, or killing the bill.

House Democratic Leader Sal Pace (D-Pueblo) made the following statement about the amendment:

“Shame on the Republicans for hijacking this straight-forward and very necessary bill for their special interest cronies.  This is the wrong way to end the session.”

“McNulty has shown that he cares more about predatory lenders than the well-being of Colorado teachers, oil and gas producers, hunters, the poor or the elderly.”

“By taking this bill hostage, McNulty has shown that he cares more about predatory lenders than the well-being of Colorado teachers, oil and gas producers, hunters, the poor or the elderly. Frank McNulty is standing up for predatory payday lender organizations while making Colorado citizens feel like they’ve been slapped with a wet leather glove.”

In a last-minute procedural maneuver, Republican House Speaker Frank McNulty is holding up a bill that is needed to govern nearly every function of government and affect every Coloradan. McNulty and House Republicans attached an amendment to Senate Bill 78, the “Rule Review” bill that will dramatically increase the amount that people will pay when taking out a short-term “payday” loan. This last-minute action is an attempt to overturn great work done by state agencies to implement rules for state and federal laws passed in recent years.

Among the rules affected:

This bill will cost Colorado approximately $800 million from the loss of a full hunting season. Those losses will come from the fees paid for licenses and permits as well as the lost revenue for restaurants, hotels, and other retailers who rely on hunters for a significant part of their business.

The implementation of HB09-1293, which changed the formula for hospital provider fees and made other significant changes to the Colorado Indigent Care Program (CICP), Medicaid, and the Child Health Insurance Program (CHIP). The hospital provider fees alone amount to $795 million in increased revenue for the state that come from federal matching funds and the changes to Medicaid alone resulted in 30,000 new Coloradoans receiving coverage. Undoing these rules will take away health care from some of our neediest people on the Medicaid, CICP, and CHIP rolls.

Finally, this will cost the state an estimated $85 million to recreate the greenhouse gas emissions standards that are part of the State Implementation Plan (SIP) for air quality control.

This last minute maneuver by House Republicans comes on the final day of the 2011 legislative session. It could lead to a special session which would cost the state an additional tens of thousands of dollars per day.