How NOT to Oppose the Colorado Option

If the debate about a legislative health care reform plan called the “Colorado Option” comes down to a battle over messaging, then Democrats should feel pretty good about where they stand at the moment.

The arguments about House Bill 1232 began last Friday in the House Health & Insurance Committee. Discussions on a potential compromise deal with insurers, hospitals, and the health care industry have been ongoing, but it still appears that the “Colorado Option” has enough momentum and support to ultimately make it through the legislature at some point in the next month or two. The editorial board of The Durango Herald endorsed the “Colorado Option” earlier this week. Dave Perry of The Aurora Sentinel backed the legislation in an editorial published today.

We talked last week about the various arguments for and against the “Colorado Option,” coming to the general conclusion that supporters of the bill were in a much stronger position than the bill’s detractors. That analysis was strengthened by the silly attacks thrown at the legislation this week in a mail piece from the opposition group calling itself “Colorado’s Health Care Future.”

We’re not sure how widely the following mailer was distributed in Colorado, but it seems to have been largely targeted at “grasstops” opinion leaders. Regardless, the message would fail no matter the audience: 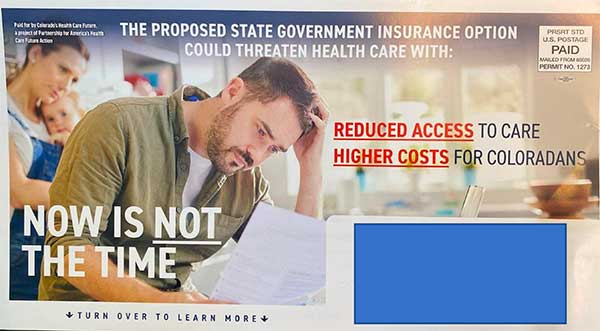 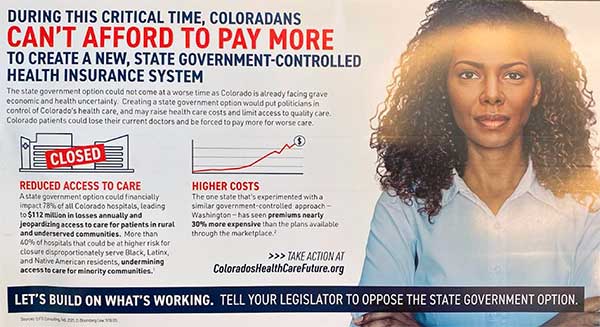 The two main arguments made in this mailer are as follows: 1) Hospitals in Colorado could lose money if the “Colorado Option” becomes law, and 2) A “similar” approach in Washington state led to an increase in health care premiums.

The first argument is so laughable that it’s easy to dismiss: That Colorado hospitals could face “$112 million in losses annually” if the “Colorado Option” becomes law. Colorado hospitals are literally THE MOST PROFITABLE IN THE ENTIRE COUNTRY, but even if you didn’t know this, why would the average person care if hospitals lost money? What was the backup argument? That pharmaceutical company executives might be forced to accept smaller annual bonuses?

The second argument requires a little more research to refute, but it doesn’t take long to get there. The mail piece claims that a “similar government-controlled approach” in Washington state ended up making health care premiums more expensive for consumers. But this plan, called “CascadeCare,” was only offered in 13 of Washington’s 39 counties, which would obviously significantly limit the risk pool that should make such plans cheaper for consumers. “CascadeCare” only included about one-third of the state; the “Colorado Option” would include the entire state. In other words, CascadeCare is similar to the “Colorado Option” like apples are similar to car batteries.

These two arguments were presumably selected by hospitals and the health care industry because somebody believed that they were among their strongest talking points. We’d love to know what got left on the cutting room floor.