(All you can say is sham-wow – Promoted by Colorado Pols) 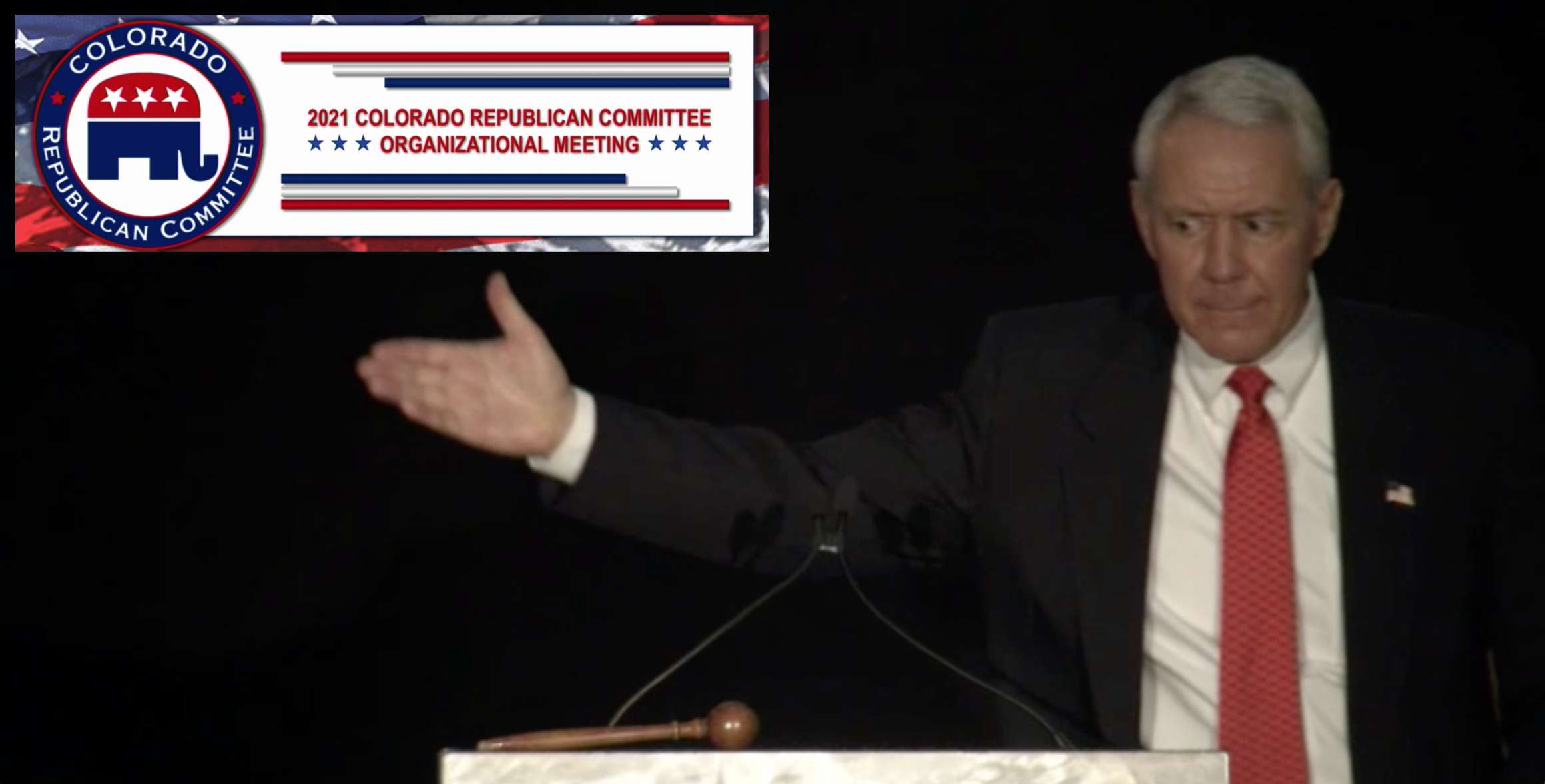 The Tea Party/Patriot wing of the Colorado Republican Party flexed its collective muscle last Saturday, leaving no doubt who’s in charge of the state GOP.

Gessler’s loss wasn’t the day’s only defeat for establishment Republicans, however. GOP Central Committee members, comprised of local and state precinct leaders and delegates, voted Saturday to overturn their own leaders’ decision to order a new election of party officers in El Paso County, after dozens of party members submitted signed statements raising concerns about the voting process, including the El Paso County Sheriff, who called it “a sham.”

The party, whose elected members have introduced multiple bills purporting to strengthen election security based on debunked conspiracies of election fraud, has yet another internal voting controversy within its own ranks.

In a March 17 report, the Colorado GOP Executive Committee ordered a new election for El Paso County GOP officers, to be held within 60 days of the adoption of the report, which was expected to take place at last Saturday’s Central Committee meeting.

CPR’s Bente Birkeland reported on some elements of the controversy prior to the meeting, including the very short notice of online pre-registration requirements to be completed a week prior to the meeting date. CPR’s story followed a report by the Colorado Springs Independent’s Heidi Beedle who covered the apparent partnership between Tonkins and extremist militia group FEC United, which was both recruiting voting members to support Tonkins and also supposedly providing security at the event.

Upon reviewing the evidence presented to them, nearly all of the top leaders of the Colorado Republican Party found enough problems with the election that they voted 13-3 to “set aside” the election result and order a do-over.

The evidence included statements from several of the most prominent Republicans in the county.

Congressman Doug Lamborn (R- CO) says the short notice prevented him from participating. Longtime state Sen. Bob Gardner (R-Colorado Springs), an attorney, says despite having been pre-credentialed and online at the appropriate time, he was never issued a ballot as promised.

“The [El Paso County] central committee meeting of February 6th, 2021, in my opinion, was a sham from the beginning to its conclusion. It was nothing more than a cover up to make it appear fair and impartial and it was none of either. It was bully tactics with a maze of steps I feel were put in place to disqualify potential voters. I am certain that many others would have and should have participated.”

Reached by phone, Sheriff Elder reiterated his observations that many people attempted to participate in the EPC meeting and election remotely, but either dropped or were muted during the virtual meeting. Referring to his statement, he said,

“I was asked if I saw irregularities to let them know, so I did,” explained Elder. “I thought to myself, if you’re gonna hold these things, and we’re talking about transparency, and voter engagement, you sure weren’t doing that with the [El Paso County] central committee meeting…If you’re gonna talk about fairness in elections, you have to apply it to your own.”

Williams submitted a letter three days prior to the meeting, detailing at least eight distinct problems with the process laid out by Tonkins and her team.

“I’ve reviewed the revised call, rules, agenda, and the website for Saturday’s meeting and wish to raise several concerns,” Williams’ letter began. “What is the basis for requiring preregistration for online attendance? And why was this requirement not in the subject line when it was sent with less than two days to comply?”

Williams also noted a problem with the Credentials Committee: “It appears you have appointed a candidate for office to run credentials for her own election.”

Their statements, along with many others, led to the Executive Committee’s decision to order a new election.

“The Executive Committee finds that the pre-credentialing process for remote participation in the organizational meeting was irregular in a manner sufficient to affect at least twelve votes in the election of officers. Because no officer was elected by more than a twelve vote margin, the validity of all three officers’ election cannot be assured…the Executive Committee has determined to grant the relief afforded to successful contestants of elections under Colorado law: a set-aside of the election result and an order for a new election…

The Executive Committee therefore ORDERS that a new election for Chairman, Vice Chairman and Secretary of the El Paso County Republican Central Committee shall be held within 60 days of this Report’s adoption by the State Central Committee.”

Following Chairman Buck and General Counsel Chris Murray explaining the issue, both sides had five minutes to make their case. Tonkins asked Rep. Dave Williams (R-Colorado Springs) to speak on her behalf. Williams framed the dispute as a matter of sour grapes by losing candidates. He rejected as false the claims of those Republicans, including Lamborn, Gardner, Landgraf and others, who signed statements saying they wanted to vote but were unable to do so.

“Peggy [Littleton’s] complaint about “disenfranchisement” was joke-like, writes Pitchford. “Rumor has it there are Mailchimp records showing those who said they didn’t receive notice add actually received and opened their Call emails – but failed to act on them. It wasn’t Vickie’s fault if Senator Bob Gardner was on an airplane and wasn’t able to vote. It was the state party’s emergency by-laws that disallowed proxy voting.”

State Sen. Paul Lundeen, an El Paso County resident, spoke in favor of redoing his county party’s election. Ironically, Lundeen recently participated in an election fraud conspiracy panel at which he described Colorado’s election process as in “crisis,” claiming “there are several single points of failure items that we need to be looking into.”

At least one member of the Executive Committee, attorney Randy Corporon, reversed himself and spoke in favor of overturning his own vote to redo the election.

Corporon said the Executive Committee’s decision was based upon “a very short process with lots of information to consider.”

“What I’ve been able to do since making that vote was not only read the stuff that was submitted with regards to the appeal, but understand and learn more about what actually happened,” Corporon continued. “I believe the state party should not get involved with changing county elections except when there’s fraud or dishonesty of some kind, and that didn’t happen here. It was a rushed process with COVID regulations and all the other junk you’ve got to do. So I fully support reversing the vote that I made as an Executive Committee member, and allowing this election to stand.”

Corporon was one of 13 votes in favor of redoing the El Paso County election. There were three votes against. Then-chair Buck said he didn’t vote since he wasn’t needed to break a tie. As the former Vice-Chair, Newly elected Chairwoman Kristi Burton Brown also voted, though it’s unclear whether she was in favor or opposed to overturning.

Reached for follow-up, Corporon noted that by the time it came for him to cast his vote during the Executive Committee meeting, it was clear that the result was going to be to overturn. He believed at the time that the decision to order a full redo rather than simply adding the votes of those who had been unable to participate to the tabulated results was a reasonable solution.

Corporon says he changed his mind after further review of Tonkins’ appeal documents as well as reflecting on “the bigger problem in El Paso [County].

“It’s the division between the current grassroots leadership and the old establishment leadership,” said Corporon. “It’s been a constant battle down there to unseat [EPC Chair] Vickie Tonkins. And more importantly, as I said during the [central committee] meeting, absent some clear evidence of fraud or criminality, the state party should not interfere in these county elections.”

Ultimately, members roundly rejected the report, 206 – 177. Cheers went up when the results were announced.

Brown’s victory over Gessler can clearly be characterized as a victory for the more conservative grassroots wing of the party over its slightly more moderate establishment or corporate wing. The Central Committee’s rejection of its leaders’ order for a new election in El Paso County can certainly be viewed the same way.

Both results raise questions about how the party will deal with issues of election integrity within a group that has grown overwhelmingly distrustful of modern voting practices, a challenge not lost to at least some among its own ranks. Jonathan Lockwood, a Republican consultant who was defeated in his bid to run the party, offered his take on last weekend’s election results.

“The Republican Party needs a serious, and radical, management overhaul and a reality check,” said Lockwood. “Until the party holds accountable leaders and members, the party will never effectively hold accountable Democrats or other institutions.”