“A bear woke me up by his bad breath, and I slugged him, and then I shot him.” 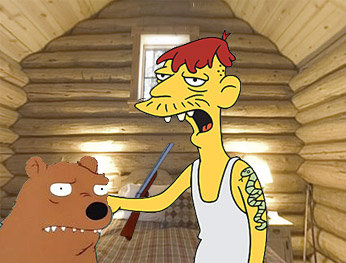 We talked yesterday about a bill from Rep. J. Paul Brown, which would overturn part of a 1992 voter-approved statute that bans hunting of bears in the state between March 1st and September 1st. Brown’s bill is opposed by environmentalists and animal rights groups, and although intended to increase the Department of Wildlife’s authority to set the dates for legal hunting of bears, the DOW didn’t request the bill and is officially neutral.

Rep. Brown himself, though, of course isn’t “neutral” on the subject of bears–from a Durango Herald editorial in January, written in anticipation of a Brown bill on the hunting of bears:

State Rep.-elect J. Paul Brown mistepped in saying recently that he wants to introduce legislation to let the Division of Wildlife allow bear hunting earlier in the year. Colorado voters outlawed bear hunting between March 1 and Sept. 1 in 1992, and there is no reason to think they have changed their minds.

Moreover, as a sheep rancher, Brown left himself open to charges that he put his own interests before the wishes of the voters. That is not a perception to encourage…

Like we said yesterday, Rep. Brown’s bill runs counter to Republican talking points on a host of issues, where opposition to an otherwise popular bill is justified on the basis of prior election results–think TABOR and fee hikes, civil unions and Amendment 43, do not think Amendment 63 and “Obamacare,” etc. This would theoretically make the bill tough for fellow Republicans to support, but that didn’t prove to be the case in committee yesterday.

And, as both the Herald and the audio clip above point to, sheep rancher Brown’s interest in bears is definitely on the “business end.” Going back a long time: Brown is on record protesting state constitutional Amendment 14 way back in 1996, which banned “instant kill” body gripping traps, leghold traps, and poisons for predator control (long since law). In terms of Brown’s concern for animals beyond market value, you can read this Pagosa News op-ed alleging Brown repeatedly transported horses across state lines to Texas and sold them for slaughter.

We said before that Rep. Brown doesn’t strike us as representative of the many good rural Colorado residents we know, and after reading that stuff, we really think not.

And like Janak “Dr. Nick” Joshi on health care, we’re just not sure Brown is the best legislative mouthpiece on animal management. Especially when the DOW hasn’t asked for the “help.”