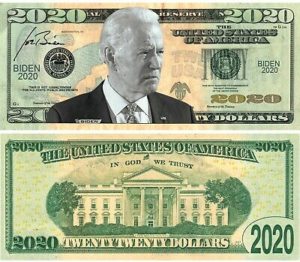 Your Biden Bucks are on the way.

Eli Stokols, veteran Colorado political reporter now with the Los Angeles Times, reports that President Joe Biden has signed the $1.9 trillion American Rescue Plan a day earlier than originally scheduled, the purpose being to get the economic relief in this historic legislation into pockets across America that much sooner:

Biden, who is set to address the country at 5 p.m. (Pacific) in his first Oval Office address, had planned to sign the legislation into law Friday. But the president and his advisors, who emphasized the urgency of delivering $1,400 direct relief checks and extended unemployment benefits throughout the legislative process, announced just after 9 a.m. (Pacific) Thursday that they didn’t want to wait any longer…

Its enactment comes one year to the day since the World Health Organization declared the coronavirus outbreak a pandemic. The outbreak has devastated the economy, costing some 10 million jobs and claimed more than 529,000 lives in the U.S.

Despite having earned no Republican support, the stimulus package is broadly popular with the country, with three of four Americans supporting its passage, according to recent polling.

Spend it wisely–but not too wisely, since it’s about goosing the economy!

The rest of you buy something nice.