Get More Smarter on Tuesday (March 2) 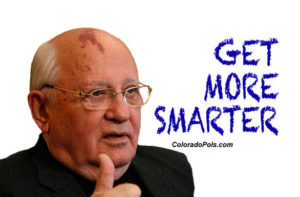 Happy Birthday, Gorby! Mikhail Gorbachev, the last Soviet leader and a great ’80s movie villain, turns 90 years old today. If you think we missed something important, please include the link in the comments below (here’s a good example). If you are more of an audio learner, check out The Get More Smarter Podcast. And don’t forget to find us on Facebook and Twitter.

► We’re not out of the Coronavirus woods just yet, people! From The Washington Post:

Cases over the past week jumped in every region except for Africa and the Western Pacific, the U.N. agency said, after declining for six weeks straight. In the United States, a steady drop in new cases last month also appeared to be leveling off and there are fears it could reverse course amid yet another wave of infections.

And now, the good news: More than 75% of Colorado educators and childcare workers should receive the first dose of a COVID-19 vaccine by the end of the week. Colorado is also expected to receive its first allotment of the new Johnson & Johnson vaccine within the next couple of days.

Finally, back to some less-good news: Colorado officials think at least 800 people have contacted COVID-19 twice, but accurate data is hard to assemble.

► And now, your state legislature update:

As Alex Burness reports for The Denver Post, Democratic lawmakers are considering a package of legislation to give tenants more power in dealing with landlords:

Likely to be piled into at least five separate bills, their proposals include creating a new state eviction moratorium that possibly runs into 2022; changing eviction court policies to give tenants more time and flexibility to resolve cases; and limiting fees for late payments and breaking leases.

Elsewhere, a safe storage gun bill has made it through its first committee hearing.

Legislation to remove the statute of limitations for child sexual assault crimes made it through the State Senate.

Democratic leaders in the State House are opposed to legislation that would allow for the privatization of Pinnacol Assurance, which handles workers’ compensation insurance for many public workers.

Westword is tracking all the weed bills.

Republican lawmakers who pressed ahead with a ludicrous school voucher bill have significantly hurt their ability to have this discussion for years to come.

President Biden’s two immediate predecessors had ambitious goals to rebuild the country’s infrastructure, but both left office having made little progress in fixing the nation’s bridges, roads, pipes and broadband. President Donald J. Trump announced so many meaningless infrastructure weeks that the term became a running joke of his administration.

As a candidate, Mr. Biden went further than either Mr. Trump or President Barack Obama by promising to pass a multitrillion-dollar package intended to create jobs and help the United States compete with China. And if anything, his first month in office, in which a power crisis in Texas left millions of people in need of water and electricity, has underscored the urgency of upgrading the nation’s aging structural underpinnings.

But while the goal of addressing the United States’ infrastructure is bipartisan, the details are not. That includes how much to spend, what programs count as “infrastructure” and, most important, whether to raise taxes to pay for it.

You can probably just skip over the part in the story where politicos ponder the possibility that Republicans will do anything helpful on improving our nation’s infrastructure.

► According to Rep. Lauren “Q*Bert” Boebert, the big COVID stimulus package passed by the House of Representatives last week includes more than $400 billion dollars for funding abortions in America. If Boebert’s math is correct — and it most assuredly is NOT — this would be enough money to allow every woman of childbearing age in America to have 10 abortions.

► As The New York Times reports, self-reflection is not really a key trait of the modern Republican Party:

► The U.S. Senate approved Miguel Cardona as Secretary of Education on Monday. Despite the best efforts of former Education Secretary Betsy DeVos, the department does, in fact, still exist.

The top-performing link posts by U.S. Facebook pages in the last 24 hours are from:

The lasts time a Democratic senator got the gavel for two subcommittees in his or her first year, @Hickenlooper aides say, was 1979, when Montana’s Max Baucus had the distinction.

► Since we’re on the subject of Ernest Luning, sort of, here’s more from the publication formerly known as the Colorado Statesman:

Chris Meagher, a former spokesman for the Colorado Democratic Party and veteran communications adviser to several leading Democrats, has been hired as a deputy White House press secretary.

► Thanks to funding from NASA, students and researchers at CU-Boulder are aiming for the dark side of the moon.

► Colorado Newsline reports on the final members selected to Colorado’s congressional redistricting commission. Now we wait to see if the U.S. Census Bureau can provide updated population figures in time for the commission to draw new maps by September.

► Federal law enforcement officials say the “Proud Boys” were organizing attacks on the U.S. Capitol on January 6. From The Washington Post:

U.S. prosecutors alleged for the first time that a Washington state leader of the Proud Boys was nominated by members of the group to take charge of the U.S. Capitol breach on Jan. 6 and carried out a plan to split into groups to break into the building from as many points as possible.

Nordean was “nominated from within to have ‘war powers’ ” to lead activities at the Capitol after the group’s chairman, Henry “Enrique” Tarrio, was arrested by D.C. police upon arriving in the city two days earlier, Assistant U.S. Attorneys James B. Nelson and Jason B.A. McCullough alleged. They do not state whether Nordean and/or others were formally selected to lead events that day.

Meanwhile, FBI Director Christopher Wray warned today that the Jan. 6 attack on the U.S. Capitol has inspired a new generation of militia-cosplaying nutballs.

► It is all but certain that the next leader of the Colorado Republican Party will be a full-fledged 2020 election fraud truther.

The fake news media and their allies in Silicon Valley made Governor Cuomo out to be some iconic cross between King David and Tom Brady.

What a big lie that turned out to be.https://t.co/JJKEpAGgw3

The question: “Is there anyone more pathetic than Nikki Haley?”

► Denver is spending $15 million to turn an East Colfax strip club into affordable housing. No word on whether each apartment will have its own pole.