Colorado Republicans aren’t plotting much of a 2022 comeback at the moment, in large part because they are still obsessed with promoting The Big Lie that Trump actually won the 2020 Presidential election instead of the guy who has been living in the White House for almost two months now. The favorites to become the next Chair of the Colorado Republican Party are in agreement about the power of this fallacy and are openly running on their commitment to an election fraud narrative that simply doesn’t exist.

Denial has been a consistent theme for the Colorado GOP. After Democrats crushed Republicans in the 2020 election cycle, the second consecutive drubbing for the GOP in which its top-ticket candidates lost statewide by massive margins, House Minority Leader Hugh McKean stammered: “We hear all of this talk about how blue Colorado might be getting. I don’t believe it for a second.” Obviously, it doesn’t really matter if McKean “believes” that Colorado is a blue state. The math is clear.

But this commitment to denying reality is digging Republicans into an ever-deeper hole now that the State Legislature is back in session. Late last week, the House Education Committee rightfully killed a School Vouchers bill sponsored by Republicans that was so bad it should never have seen the light of day. House Bill 21-1080, “The Nonpublic Education and COVID-19 Relief Act,” sought to enact a private school tuition income tax credit in Colorado…at a cost of $663 MILLION DOLLARS! 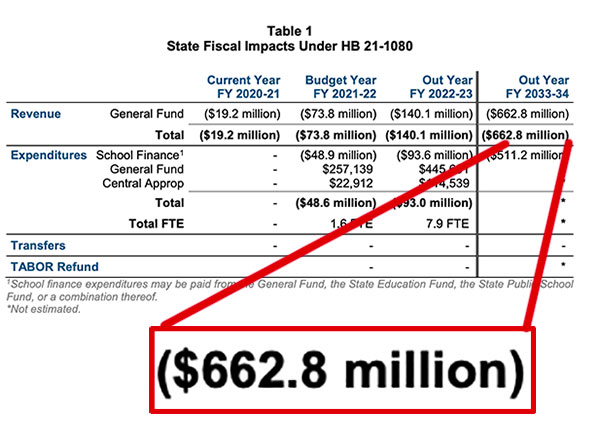 Colorado’s total General Fund budget is about $12 billion; roughly 20% of this amount is allocated toward K-12 education funding. According to Legislative Council Staff, this voucher bill would “reduce General Fund revenue by $662.8 million annually.” You don’t need an accounting degree to understand how much this would devastate Colorado’s ability to pay for…well, for pretty much anything.

The prime sponsor of the voucher bill is Rep. Mark Baisley (R-Douglas County), but 12 other House Republicans signed on as co-sponsors — including McKean. This bill should never have been drafted in the first place, but after the Fiscal Note became available, Republicans should have dropped it like it was on fire. A school voucher bill was never going to go anywhere in a Democratic-controlled legislature, so the only thing Republicans accomplished by moving forward with HB21-1080 was to give voucher opponents a $663 million talking point that they can use for the next decade.

The lingering question here is about how much McKean was involved in the bill’s introduction. Baisley’s turd was too horrendous to allow into a committee hearing, and any political leader with half a brain would have figured this out right away — or at least demanded that the sponsor go back to the drawing board.