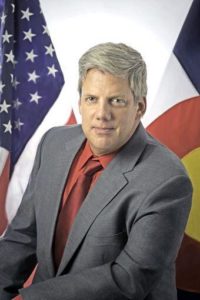 The Colorado Springs Gazette reported Friday on a mystery that emerged last week surrounding newly sworn-in Republican Rep. Ron Hanks, who disappeared after the first day of last week’s abbreviated opening of the Colorado General Assembly and hasn’t been seen since:

The Penrose Republican missed every vote on all seven bills that went through the General Assembly in the first week, including being gone when some of those bills went through a committee he’s assigned to: House State, Civic, Military and Veterans Affairs…

It’s beyond unusual for a first-term lawmaker to miss so many days early on, and Hanks has not returned phone calls or emails from the press about his whereabouts.

Curiously, this story makes no mention of what Rep. Hanks was doing before being sworn in to the state legislature last week–as we discussed in this space, and the Denver Post’s Saja Hindi reports in her own story this past weekend on Hanks’ absence from the legislature:

A newly elected Colorado Republican lawmaker who attended the president’s Jan. 6 rally [Pols emphasis] has been absent for the majority of the three-day legislative session that started Wednesday…

House Minority Whip Rod Pelton, a Cheyenne Wells Republican, said Hanks informed him he had a “prior commitment” Wednesday. Members are expected to inform the whip of any absences.

House Minority Leader Hugh McKean, R-Loveland, said he reached out to Hanks on Thursday. On Friday morning, Hanks texted him and told him he was feeling “under the weather.” McKean did not ask for further details.

Let’s review: Rep. Ron Hanks traveled to Washington, D.C. to attend the January 6th rally that degenerated into a violent insurrection attempt and deadly assault on the U.S. Capitol. Our readers know this, but apparently it was news to the Gazette. Hanks then appeared at the Colorado state capitol to be sworn in one week later, only to disappear after being sworn in. Hanks was then absent through the legislature’s temporary month-long adjournment Friday to avoid the COVID-19 pandemic. And only after a good deal of sleuthing by reporters, we find out that Hanks texted GOP Minority Leader Hugh McKean that he’s “under the weather?”

Folks, if every epidemiological alarm bell is not going off in your head right now, 2020 must have passed by without you noticing.

But it’s okay, because as the Gazette continues in their story that somehow managed to forget that Hank had just returned from Washington, D.C., where literally thousands of maskless Trump supporters had exchanged clouds of droplets with one another while protesting/rioting/insurrecting against Donald Trump’s election defeat:

However, as it turns out, there’s a good explanation. According to several sources, including Rick Castor, chair of the Fremont County GOP, Hanks has laryngitis. [Pols emphasis] While he notified Minority Whip Rep. Rod Pelton, R-Cheyenne Wells, that he wasn’t well on Wednesday, he didn’t know he was supposed to check in each day to let people know he wasn’t coming and to be excused, an easy slip-up for a first-term legislator to make.

And then in a final gobsmacking moment of unintended irony:

Minority Leader Hugh McKean, R-Loveland, is glad that Hanks is taking care of himself. If people have learned anything from COVID, it’s that you don’t come to work sick, [Pols emphasis] McKean told Colorado Politics, and he confirmed that he knew Hanks was under the weather.

Rep. Hanks was at the Capitol on Wednesday. That means he did “come to work sick,” or at least by any reasonable COVID-19 pandemic standard in a state where he may well have been contagious. After traveling to Washington D.C., Hanks should have quarantined himself simply out of preventative caution–but obviously, following COVID-19 best practices was very far down the priority list for these people.

It is legitimately shocking that the connection between Hanks’ recent travel and his coming down with any kind of upper respiratory symptom a week later is being idly dismissed as “laryngitis” with some bogus platitudes about how it’s good he didn’t “come to work sick.” With such an obvious transmission vector, why is anyone taking Hanks’ self-diagnosis of “laryngitis” at face value? Who was in close contact with Hanks when he was at the Capitol on Wednesday? Has Rep. Hanks even had a COVID-19 test since he returned from Washington? Why are we the only outlet asking these questions?

The one thing we can say is it’s a big relief the legislature has adjourned until everybody who has to be there as part of their job has been vaccinated. Prevention, after all, is only as strong as its weakest link. Not only is Rep. Ron Hanks kicking off his legislative career with an embarrassing display of COVIDiocy, it’s clear there’s nobody in charge on the right side of the aisle looking out for the health of fellow lawmakers and the public.

Until you’ve had your jabs, keep a safe distance from all such people.