“This last-minute decision, based entirely on political expediency, will devastate our space capabilities,” [Rep. Doug] Lamborn wrote. “I call on you to use your authority upon taking office as our nation’s commoner-in-chief to reverse this foolish and hastily made decision.”

“Just as President Trump is leaving office, Colorado was not selected despite reports that it was the Air Force’s top choice,” the senators wrote. “We believe a process based on the merits will keep Space Command in Colorado. There is no role for politics when it comes to our national security.”

The Pentagon named six finalists to host the headquarters in November after a politically charged search that spanned two dozen states and lasted more than a year. Officials then winnowed it to the bases in Colorado Springs and Huntsville.

Rep. Doug Lamborn condemning President Donald Trump’s announcement as “political expediency” could be the most pointed disagreement Lamborn has ever worked up the nerve to vocalize with Trump–a sign that perhaps Lamborn too has realized the future is not on the Trump Train.

Might this decision be reversed by incoming President Joe Biden? We’ll have to see, but the worm may be turning even as the announcement is made. 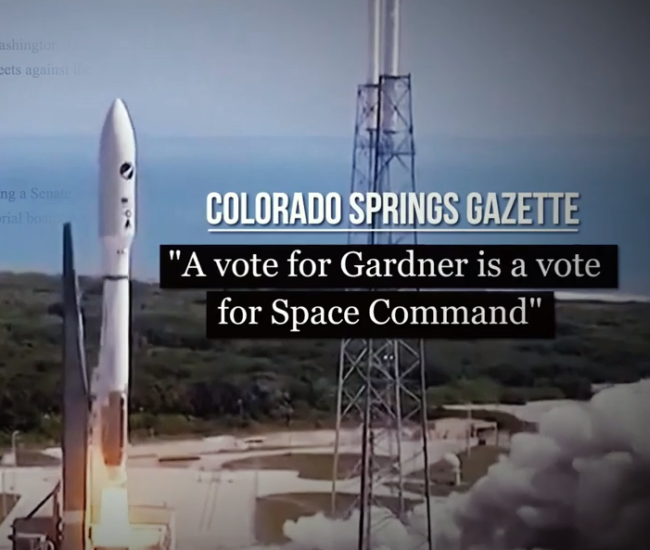 Apparently the reverse is also true.

The U.S. Space Command will be calling Alabama home permanently — and not Colorado.

In a statement, Colorado Gov. Jared Polis called the decision “misguided” and said the state’s aerospace security, military heritage, and quality of life makes it the “epicenter of national security space and the only permanent home for U.S. Space Command.”

“Reports that the in-depth military process found Colorado Springs to be the best location for military readiness and cost and recommended Colorado to the President only to be overruled for politically motivated reasons are deeply concerning,” Polis added. [Pols emphasis]

News that the U.S. Space Command’s permanent headquarters would be moving to Huntsville, Alabama instead of bringing jobs and construction money to the Colorado Springs area is a significant blow to the southern Front Range’s economy, which is heavily dependent on the region’s major military installations. During Sen. Cory Gardner’s unsuccessful re-election campaign last year, the prospect of Space Command being permanently located in Colorado was touted by the campaign one of Gardner’s biggest “accomplishments,” and was dangled by President Donald Trump himself at a campaign rally in Colorado Springs last February:

“You are being very strongly considered for the space command, very strongly,” Trump told a capacity crowd of 10,000 inside The Broadmoor World Arena and hundreds more who stood outside in the cold to watch him on a screen set up for the event.

Trump said he will decide where to house the command by the end of 2020, possibly after the November election. The decision was originally due last summer, and the delay has gone unexplained by the Pentagon.

Trump’s implied personal involvement in the decision is a rarity for the White House, which in the past two administrations has steered clear of basing decisions which are generally settled in the Pentagon. [Pols emphasis]

Despite this, as AL.com reports jubilantly, the Air Force insists they didn’t play political favorites:

The Air Force studied sites in numerous states including Alabama and Colorado, where the headquarters is temporarily located. A report in Politico today said Huntsville ranked higher than Colorado in each category of the evaluation. That included cost of living and housing availability off base.

The Politico story also quoted a top Air Force official saying the choice was “made in consultation with the White House, [Pols emphasis] senior military commanders, the congressional defense committees and others.”

Either way, at least one local Republican operative couldn’t conceal his glee at seeing Colorado lose out:

Obviously, for everyone in Colorado who wanted this major command permanently located in Colorado Springs with all the economic benefits that entails, this sucks. But it’s clear at this point the promise that a “vote for Cory Gardner is a vote for Space Command” was woefully empty. At best it was a political carrot dangled by Trump to a state his campaign quickly realized was not competitive–and no such largesse could save Gardner, who was all but written off by national Republicans early on in the 2020 cycle.

As for Alabama, we’re inclined to agree that to whatever extent Trump did have sway over this decision, he would certainly try to reward Mo Brooks and Tommy Tuberville for their unwavering loyalty right to the bitter end of Trump’s presidency. With Gardner’s loyalty to Trump there was also “no waver,” but the voters of Colorado rendered the question of Gardner’s loyalty moot. He was useless to Trump in defeat. The only caveat to this we feel obliged to add is some presumption of the best when it comes to the Air Force’s political impartiality, and readers can debate that for themselves.

Perhaps the one upside is Gardner doesn’t have to make excuses about losing Space Command now, and that’s good because we’re pretty sure nobody in Colorado would want to hear them. So long, Cory Gardner, and thanks for even closer to nothing than we thought.