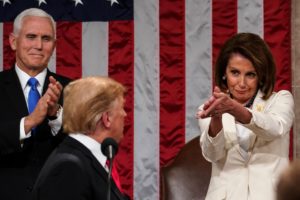 Politico reports on the latest turmoil over what was a done deal just a day ago, another round of economic relief to keep the sputtering economy going through what everyone hopes is the last winter of the COVID-19 pandemic:

President Donald Trump on Tuesday blasted the $900 billion coronavirus relief package passed by Congress, calling it a “disgrace” and asking for amendments to the bill to increase stimulus payments to Americans…

In a video tweeted by the president Tuesday evening, Trump delivered a four-minute speech listing his many grievances with the bill — which would send much-needed aid to Americans struggling amid the pandemic. Trump specifically criticized the relief package for including “wasteful spending” on issues unrelated to Covid-19, only providing $600 to individuals and families, and not giving enough emergency aid to small businesses.

The response from Democrats to this eleventh-hour scrambling of the debate over economic relief Donald Trump and Senate Majority Leader Mitch McConnell promised would flow after the election has been enthusiastic, setting up a challenge between the White House and U.S. House against the GOP-controlled Senate just days before a pivotal runoff election in Georgia decides control of the body:

Mr. President, sign the bill to keep government open! Urge McConnell and McCarthy to agree with the Democratic unanimous consent request for $2,000 direct payments! This can be done by noon on Christmas Eve!

The situation as of this writing is much too fluid to speculate about, and obviously we don’t recommend spending that $2,000 check just yet–or even the $600 check most Americans thought they were getting under the agreement reached earlier in the week. But in terms of the Georgia runoff, Trump has put Republican incumbent Senators in the two races that will decide control of the Senate early next month in an extremely difficult position. Democrats have been campaigning hard on the aloofness of both wealthy incumbents to the suffering of regular people, and their opposition in particular to larger direct aid payments that Trump is now calling for.

Beyond Georgia, Trump just undercut Republicans across the country, including all three of Colorado’s House Republicans, who voted against even the paltry $900 billion measure because they thought it was “too big.” It’s not for us to tell Reps. Ken Buck, Doug Lamborn, and exiting Rep. Scott Tipton how to explain to their MAGA hat wearing constituents why they shouldn’t get the help even President Trump wants them to have.

The other important lesson here is that once again, the nature of Democratic objections over prior versions of COVID relief bills has been clarified. Yes, Democrats have dug in at various points in the negotiations over the past year, but always with the objective of getting more aid for Americans, not less aid. Once you understand that, this silly political game of hot potato is irrelevant. Now-defeated Sen. Cory Gardner exploited impasses in negotiations to ceaselessly lay blame on Democrats for “holding up relief,” when the real issue was then–and remains–Republican unwillingness to provide the full scope of what’s needed.

Well folks, Donald Trump just blew that to smithereens! And now Democrats are calling his bluff. Stay tuned for the resolution, but as with all things Trumpian don’t count your chickens before they’re direct deposited.