Congresswoman-elect Lauren “Q*Bert” Boebert has been one of the leading voices in Colorado parroting President Trump’s numerous fact-free claims of election fraud. Not that she actually understands any of what she is saying. Take a look at what Boebert Tweeted this afternoon before deleting it less than an hour later — after many comments like this: 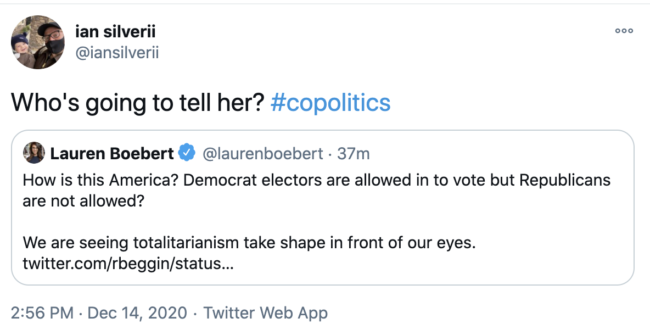 Fortunately for Boebert’s edification, Marshall Zelinger of 9News had a very succinct answer for her:

Yes, you’re reading this correctly. Boebert has absolutely no idea how the Electoral College works, but she’s mad as hell about it not working correctly for President Trump!

And as The New York Times reported this afternoon:

Frankly, it’s a little confusing that Boebert is even worried about the Electoral College, because she has her own theory about how Presidents get elected in the United States:

I told the president to keep fighting & use every bit of authority our Constitution grants.

The Supreme Court does not decide the winner of the election. Congress does. pic.twitter.com/vM8nRTPsOF

And Lauren Boebert is going to be an actual Member of Congress in a few weeks.