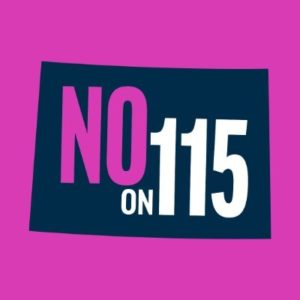 In a hard-won victory for supporters of reproductive rights in Colorado and across the nation, Proposition 115 was soundly defeated today by Colorado voters.

As of 9 p.m., 59.8 percent of voters rejected the measure, with nearly 80 percent of precincts reporting. The race was expected to be close, but the results were first called by NBC around 8:30 p.m.

“Today, we can proudly confirm that Colorado remains a safe haven for access to the full spectrum of sexual and reproductive health care, including abortion care,” said Vicki Cowart, President & CEO of Planned Parenthood of the Rocky Mountains. “Once again, Colorado voters confirmed what we have always known: that health care decisions belong between a patient and their health care provider, without political interference.”

The ballot measure would have banned abortion at 22 weeks of pregnancy in Colorado with no exceptions for rape, incest, the patient’s health, or a lethal fetal diagnosis, seriously damaging the state’s status as a safe haven for abortion access in a sea of states that place major restrictions on the procedure and in the midst of national attacks against reproductive health care.

Given that Colorado is one of only seven states that do not impose gestational limits on abortion, and is home to a clinic that is world-renowned for offering later abortion care to those with medically complicated pregnancies, Prop. 115 would have had a global ripple effect on abortion access for those in the most desperate of circumstances.

The defeat of the ban comes at a time when abortion rights advocates are preparing for the worst following the confirmation of Supreme Court Justice Amy Coney Barrett, who represents a grave threat to the constitutional right to abortion due to her well-documented anti-abortion stance and the new 6-3 conservative majority on the court. If the court chips away at the Roe v. Wade decision – or does away with it entirely – abortion access could be entirely dependent on the handful of states like Colorado where abortion is unrestricted.

“Tonight, we celebrate this win. Tomorrow, our work to protect our rights continues,” Cowart said. “Reproductive rights face new threats at the national level, with the new makeup of the Supreme Court and other states restricting access to care. Now more than ever, Colorado must remain a safe haven for access for anyone who needs it.”

Focusing on the small percentage of abortions that occur in the second and third trimester has been a key strategy for conservatives and anti-abortion activists, particularly since Trump was elected president after speaking about these abortions in graphic and misleading terms. Ever since, there’s been a rampant spread of misinformation about these procedures and those who seek them, including from the proponents of Prop. 115.

The myth promoted by Trump during a 2016 presidential debate that “you can take the baby and rip the baby out of the womb, in the ninth month, on the final day,” while completely inaccurate, is at the heart of the misinformation campaign against later abortion care. This myth is reflected in the names of two of the key groups who pushed for the ban’s passage, Due Date Too Late and End Birthday Abortions, and relies on a lack of understanding of when, why, and how people seek abortion later in pregnancy.

Prop. 115 represented a major test for that strategy. The vast majority of the 43 states that impose gestational bans on abortion have done so through state legislatures, rather than putting the question to voters. It appears that voters in Colorado were able to see past the myths around later abortion.

It wasn’t, however, the first time Colorado voters were asked about abortion. In 2008, 2010, and 2014, Coloradans voted against ballot measures that would have defined life as beginning at conception, effectively banning all abortion in the state.

Abortion rights advocates frame this most recent rejection of such a ballot measure as a clear message from Colorado voters to anti-abortion activists: don’t try this again.

“The voters of Colorado have spoken loudly and clearly — abortion bans have no place in our state,” said Lucy Olena, campaign manager for the No on 115 campaign, in a press release. “For the fourth time in 12 years, Coloradans have rejected attempts to ban abortion at the ballot, trusting patients and families to make the personal medical decisions that are right for them, without interference from politicians.”

Over the past several months, women who have sought abortion care later in pregnancy have been speaking out to educate voters about their experiences. In particular, women from out of state who have sought this care in Colorado due to a gestational ban in their home state have been explaining how those bans have impacted their lives and their health.

“Today is a victory for every person who has ever been shamed or stigmatized for having an abortion,” said Dusti Gurule, executive director for the Colorado Organization for Latina Opportunity and Reproductive Rights (COLOR) and co-chair of the No on 115 campaign. “It’s a victory for every person who has been denied an abortion in their home state and had to travel thousands of miles for the medical care they needed.”

That includes Leah Huff of Iowa, who sought an abortion in Colorado after learning her pregnancy wasn’t viable and dealing with an underlying condition that could have caused her to lose her eyesight. Doctors in her home state refused to perform an abortion due to the state’s gestational limit, despite the Iowa law’s exception for serious threats to a patient’s health.

That includes a woman who submitted an opinion piece to the Colorado Times Recorder under the condition of anonymity. She sought an abortion later in pregnancy in Colorado after facing numerous barriers to health care during the beginning of the COVID-19 pandemic, which in addition to an underlying health problem, resulted in her not knowing she was pregnant until after her state’s gestational cutoff.

That includes Colorado resident Amy Lynn, who received a devastating fetal diagnosis late into a pregnancy. She said she’s grateful that she lived in a state like Colorado, where she had time to make an informed decision, to talk it through with her husband, to consult with doctors.

“We are so relieved Prop. 115 was soundly defeated,” said Erika Christensen, who became an advocate for later abortion patients after seeking an abortion later in pregnancy in Colorado, in a statement to the Colorado Times Recorder. “The rhetoric from the proponents has been really harmful to people who have sought later abortion care and we’re grateful to the people of Colorado for standing by us and for understanding that the human body doesn’t follow legal timelines.”

This is just a sample of those who’ve spoken out about why they sought later abortion care in Colorado. Over 150 people who have had abortions later in pregnancy penned an open letter in opposition to the measure.

According to an analysis from the Guttmacher Institute, the measure would have forced Coloradans seeking abortion care later in pregnancy to travel 30 times farther to get care.

The measure also received fierce opposition from medical professionals. The No on 115 campaign was endorsed by several major medical associations, including the Colorado Medical Society, the American College of Obstetricians and Gynecologists, the Association of Women’s Health and Neonatal Nurses, the Colorado Academy of Family Physicians, and more.

Many medical professionals spoke out against the measure’s lack of exceptions for the health of the patient or for a lethal fetal diagnoses, in addition to a narrow exception for the patient’s life that some said amounted to no exception at all. They also highlighted politicians’ and anti-abortion activists’ lack of understanding around the complexities of pregnancy.

Opponents of the ban also call it a win for people of color, who face additional barriers to reproductive health care. “Not only is this a win for the reproductive rights movement, this is a win for Black and Indigenous people and other communities of color who would have been disproportionately impacted by this proposition,” said Gurule.

If Prop. 115 had passed, it could have been a signal to anti-abortion activists in other states that ballot measures represent a potential pathway to passing more abortion restrictions, especially considering Colorado’s status as an increasingly reliable blue state.

Its passage also would have been a boon for anti-abortion activists nationwide who say that Democrats are too extreme on abortion, a central message of the Prop. 115 campaign. The national group Democrats for Life and its Colorado affiliate were key supports for the initiative, filling in for the absence of bigger and more powerful anti-abortion groups, one of which said it wouldn’t support the measure because it didn’t go far enough.

Other than the Democrats for Life, the Catholic Church in Colorado was a critical supporter of the proposition, all but ensuring it qualified for the ballot by circulating petitions at the many Catholic churches around the state.

Denver Archbishop Samuel Aquila’s extremism on abortion and other social issues, and Prop. 115 supporters’ embrace of the church, represented a major contradiction for a campaign that characterized itself as moderate and attempted to appeal to voters with a social justice consciousness. For example, the campaign at times tried to co-opt the Black Lives Matter movement, framing abortion as a threat to Black lives.

“Our Catholic faith teaches that every person has rights, responsibilities and a conscience. Only a person considering an abortion can know the full circumstances around the decision and the full impact the decision will have,” said Jamie Manson, president of Catholics for Choice, in a press release following the defeat of the measure. “Research has demonstrated that six-in-10 Catholics believe abortion can be a moral choice. Today’s results show that Colorado’s bishops and other members of the religious right don’t speak for all the Centennial State’s Catholics. Despite their repeated calls for policies that would shame, judge and punish people needing reproductive health care, Catholics, along with the majority of Coloradoans of all backgrounds, have rejected attempts to limit access to abortion. Once again, the people have spoken. It’s time for the bishops and right-wing leaders to listen and respect their choice.”

Proponents of Prop. 115 have not yet commented on the defeat of the measure, and did not immediately return an email from the Colorado Times Recorder. This story will be updated with any response.