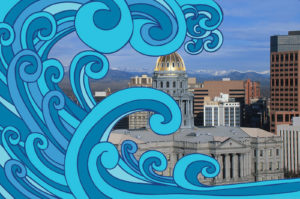 Richard Murray, a Republican running for a seat on the board that controls the University of Colorado, centered his campaign, in part, on warning voters that if he lost, Democrats would not only “flip control of the CU Board of Regents for the first time in 40 years” but also “take over the last statewide elected body with a Republican majority.”

Murray will lose to Democrat Ilana Spiegel by a wide margin, according to election results as of 10 p.m. Tuesday, and Democrats will continue to control the state House and the state Senate. Democrat Jared Polis occupies the governor’s mansion.

Murray didn’t return a call for comment Tuesday night seeking to know how it feels to lose his race and witness a historic assemblage of power by Colorado Democrats.

Gahnal’s 2016 victory marked the last time a Republicans won a statewide office. Ganahl captured her “at large” race with 51% of the vote over former State House Speaker Alice Madden, even as Hillary Clinton won by five points in Colorado.

In 2018, Democrats won control of the Secretary of State, Treasurer, and Attorney General offices. They will be up for re-election in 2022.

In 2018, Democrats also gained control of the Colorado Senate, after losing the chamber in 2014, once again giving them the “trifecta” (House, Senate, Governor) that they previously enjoyed from 2012 until the 2013 recall elections flipped control of the Senate.

In 2016, Democrats gained a majority on Colorado State Board of Education, when Democrat Rebecca McClellan took the District 6 seat from a Republican.

In 2014, in a tough year for Democrats nationally, Gardner beat Democratic Sen. Mark Udall, eking out a win by two percentage points.

In light of demographic shifts favoring Democrats in Colorado, analysts believe the state senate may offer Republicans their best shot at regaining some power in the future.

So if Democrats pick up a state Senate seat in Centennial, as appears likely Tuesday night, they will pad their Democratic majority in the chamber. Races in Arapahoe County and the central mountains are too close to call tonight.

The last time Republicans controlled the state House was 2010 to 2012.