Team Gardner Hunkers Down with Bucket of Rocks

UPDATE: You tell ’em, Team Gardner! This is totally not sad or anything.

Colorado Sen. Cory Gardner is not going to be re-elected next month. The writing was on the wall this week, and today it became super-duper official when a major Democratic SuperPAC decided to pull out of Colorado altogether.

Gardner and his staff understand that there will be no second term for the Yuma Republican, and they’re not handling the news very well. As Alex Burness of The Denver Post reported, Gardner popped up in Aurora today and then refused to talk to the media:

Cory Gardner made a rare public appearance a bit ago, at the VA hospital in Aurora, where he and VA Sec. Wilkie spoke briefly about anticipated growth in veteran population and health care needs in Colorado. Gardner declined to take any questions from press after the event.

It is a bit weird to avoid the media when you’re a candidate for an election that is just two-and-a-half weeks away, but that’s what Gardner has continued to do (just recently, Gardner refused an interview with Ryan Warner of Colorado Public Radio). It’s also very strange to do what Gardner spokesperson Jerrod Dobkin did next on Twitter:

This did not go over well with Cindi Andrews, senior politics editor at The Denver Post: 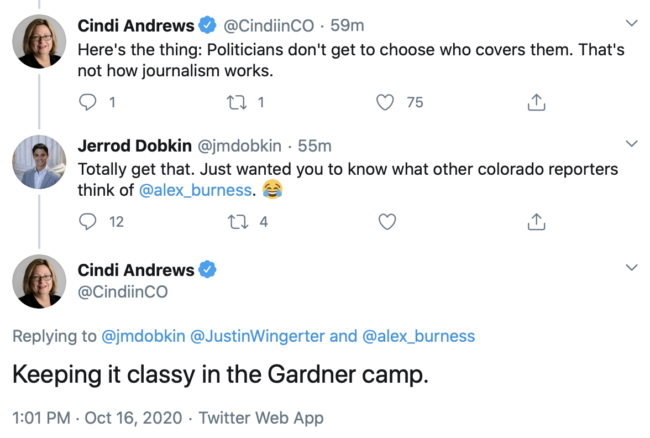 You don’t have to be happy about spending the next couple of weeks stuck in an alley with no exits, but there’s a middle ground you could occupy that doesn’t include macing your own face. Sadly, that is not part of the plan here; a few minutes later, Gardner Campaign Manager Casey Contres dove into the mosh pit:

Team Gardner is trying to portray Burness as some sort of paid left-wing shill, which is: a) Stupid, B) Pointless, and C) Not without irony. Perhaps Dobkin and Contres can also explain why Gardner regularly dodges reporters from EVERY media outlet.

You don’t always get to control whether you win or lose, but you can always control how you react to the outcome. Some people, like 2016 Senate candidate Jon Keyser, stick their fingers in their ears and hide in a dark room. Others lash out inexplicably.

Dobkin and Contres are very sad because their campaign is in the crapper, so they’re trying to make themselves feel better by bashing the media on Twitter. This isn’t going to prevent them from going down the toilet; they’re just going to end up with more shit on their clothes at the end.