Americans Love Them Some Early Voting

Ballots in Colorado hit mailboxes last weekend, and while it’s too early to look at ballot return numbers in our state, anecdotally we’re hearing that plenty of people have already submitted their votes for 2020. Colorado has been voting mostly by mail since 2014, so early voting isn’t a new phenomenon. But around the country, there are more early voting options than ever before, and people are taking advantage of the opportunity.

As the website U.S. Elections Project reports, nearly 12 million Americans have already cast ballots in 2020. It’s difficult to compare early voting in 2020 to any other year, primarily since no other election cycle had a COVID-19 problem, but we can logically assume that this is a very big deal. Here’s how these numbers compare to previous election cycles: 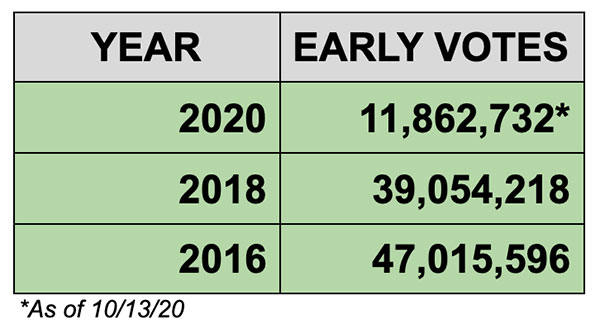 If you dig deeper into the 2020 early voting numbers, you find that voters in seven states (MN, NJ, SD, VA, VT, WI, and WY) have already cast more than 20% of their state’s total votes compared to 2016. Voters in Florida and North Dakota are knocking on that door, having cast more than 18% of total ballots compared to 2016. Voters are also shattering records for early turnout in states like Georgia and Texas.

Political observers have long predicted that 2020 will shatter the record for voter turnout in the United States. With three weeks to go until Election Day, it’s a good bet that Americans will surpass the 139 million ballots that set a record in 2016.

This is almost certainly not good news for Republicans; Texas Sen. Ted Cruz is already sounding the alarm about a potential “bloodbath” for the GOP in 2020.