In Which Ken Buck Gets to the Bottom of Antifa

It’s true because I said it.

Ken Buck has it all figured out. Mostly.

The Republican Congressman from Greeley, who also serves as the Chairman of the Colorado Republican Party, was a guest this week on the “Brian Kilmeade Show” on Fox News Radio. Buck told the talking muppet from Fox & Friends — whom Fox bills as “America’s receptive voice,” whatever that means — that he knows that “Antifa” has a well-funded leadership structure and that local law enforcement officials are not cooperating with the Department of Justice in making arrests and trying to topple “Antifa.”

Of course, Buck eventually acknowledges that he doesn’t have any specific information about any of this, but because he was a prosecutor for 25 years, he sees the bigger picture unlike the rest of the saps in Congress.

We transcribed Buck’s interview with Kilmeade so that you can get the full experience of Buck’s fearmongering nonsense:

KILMEADE: Why are you the one who has to lead the charge into finding out who’s behind Antifa, and what is their role in places like Portland, Seattle, Chicago, and New York?

BUCK: Well, I tell you, I had the privilege of prosecuting for 25 years, and so I think I look at crime a little bit differently. I think a lot of Members of Congress see individual acts of crime, and I see the organization, the money behind the crimes. [Pols emphasis] Who is funding the folks that are traveling from the West Coast to the East Coast to engage in these violent acts — to commit arson, to beat up people who they don’t agree with? And so, I am really interested in going after the funders as a way to shut down the violence.

SPOILER ALERT: Don’t hold your breath waiting for Buck to mention the 17-year-old man who traveled from his home in Illinois to Kenosha, WI and ended up killing two people and wounding another with his AR-15 rifle. What we really need to figure out is this: Who is supplying the bricks?

KILMEADE: Over in Colorado, Congressman Buck, we’re seeing Antifa everywhere. They seem organized. Some of them have radios. They seem somewhat rehearsed. We watch what they did in New York after George Floyd was killed. We saw bricks being dropped off, bats being dropped off. They have a plan.

BUCK: Absolutely. And I write about it in my book and talk about the fact that the left can’t get to their socialist utopia with our constitution in the way and with our history in the way, and with our values. And so, what they have to do is, they have to try to cancel our culture. They have to try to rewrite history and have teachers ignore history, and adopt the terrible curriculum that was written by The New York Times and try to push this, this…this really, lie, about America out to the public. 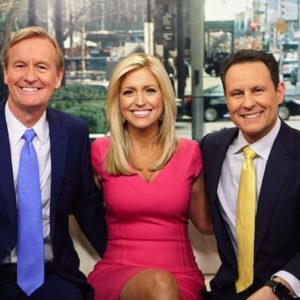 How did we get from “Antifa” to The New York Times and its “1619 Project“? Get us back on topic, Kilmeade!

SPOILER ALERT #2: Buck doesn’t actually KNOW anything about any of this.

KILMEADE: So, you have this group…who are they? Who finances them, from what you know right now?

BUCK: Sure, well, I don’t know specific donors and I won’t speculate about specific donors, but it’s clear to me that there is, a…while it appears to be a loosely-knit organization, there’s also a leadership structure that is very tightly-knit and is, uh, well-funded. [Pols emphasis] And I think that, if you look at who is funding the Left when it comes to other activities, I think undoubtedly there are the same people who are funding a lot of this activity. And I think they’re trying to disrupt President Trump’s agenda, and I think they’re doing everything they can to scare people. I think it will backfire. What I see in Colorado is that voters are concerned about this and are looking for a strong, steady hand to lead the country.

Just a few minutes ago, Buck said he was absolutely sure that “Antifa” is a well-funded organization. When pressed for details, Buck has…bupkis. It’s frightening to remember that Buck was the freakin’ district attorney in Weld County for 10 years.

Kilmeade then asks Buck to respond to an unspecified report that a former justice department official is saying that there is some sort of “proof” that these protests are actually organized violence and not just organic actions by a few bad actors. Kilmeade compares “Antifa” to Al Qaeda and ISIS; to Buck’s credit, he at least doesn’t perpetuate this nonsense:

BUCK: Well, I think there’s a difference between foreign terrorists and domestic terrorists, and I think what we need to do, and I think what the Department of Justice is doing, is conducting a grand jury investigation. I think they are doing their best to gather bank records and other records to determine where this funding is coming from.

But before we can injure ourselves patting Buck on the back, he crosses a pretty important line. This is where Buck moves from red meat posturing to more dangerous (and highly irresponsible) territory: Accusing local law enforcement officials of ignoring “Antifa”:

BUCK: Really, what it depends on, when you deal with major drug organizations and cartels from outside the country, and other organized crime efforts, like the mafia, you need to make sure that you have state and local officials who are arresting at the local level and then using those folks at the local level to gather information on the organization. The problem here is that we don’t have officials in Portland and other areas who are cooperating with the federal government, oftentimes because of sanctuary city policies and other policies that prohibit that kind of cooperation. And so, I think that the Department of Justice has a more difficult problem than it has in the past. [Pols emphasis]

What is Buck’s suggestion here? That local law enforcement officials should arrest more people on suspicion of being part of something that as far as anyone can tell HAS NO STRUCTURED ORGANIZATION? What would the paperwork say? This warrant is based on the belief that suspect is affiliated with an organization that we can find no evidence of existing?

Buck’s comments are at odds with what actual law enforcement officials are saying about “Antifa.” On Thursday, FBI Director Christopher Wray testified before the House Homeland Security Committee and told lawmakers that “Antifa” is an ideology and not an organization. From The Associated Press:

Wray did not dispute in his testimony Thursday that antifa activists were a serious concern, saying that antifa was a “real thing” and that the FBI had undertaken “any number of properly predicated investigations into what we would describe as violent anarchist extremists,” including into individuals who identify with antifa.

But, he said, “It’s not a group or an organization. It’s a movement or an ideology.” [Pols emphasis]

Clearly, the FBI Director has not been talking to supercop Ken Buck, who believes that the Department of Justice is collecting bank account information that it can use to tie people to an ideology and prove that George Soros is the mastermind of our discontent.

Does Buck actually believe this crap, or is he just playing a role that serves him well politically? It’s tough to say which is worse: That he would knowingly tout misinformation or that he has completely bought into this baloney. Either way, it says a lot about both Ken Buck the Congressman and Ken Buck the GOP Chairman.