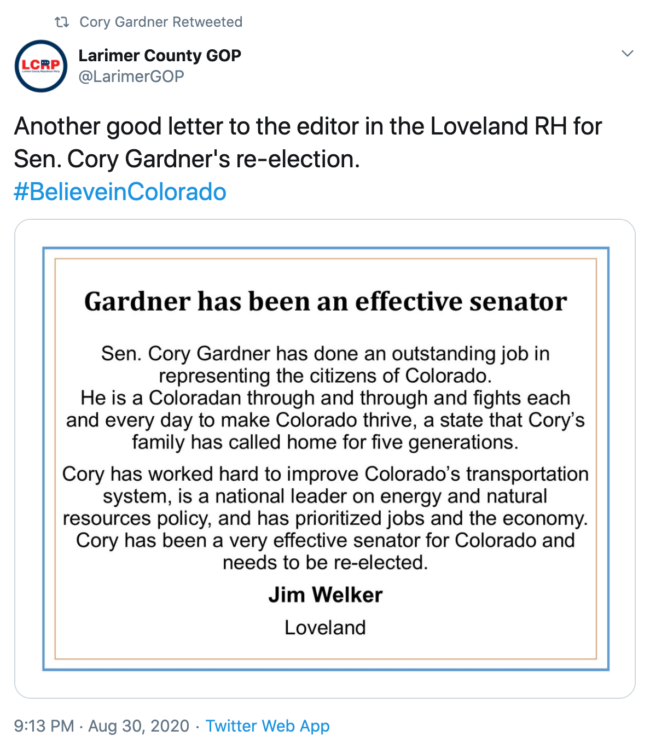 If you know the name Jim Welker and his history in Colorado Republican politics, our compliments–you’re among a select group of people. And it’s not an accident that you haven’t heard of him if you haven’t, since former Rep. Jim Welker of Loveland back in 2006 helped wreck the Republican brand in this state ahead of an electoral shellacking that helped set the tone of Democratic dominance in state politics for the next going-on fifteen years. Generally speaking, local Republicans don’t like to talk about him. The Denver Post reported on Welker’s decision not to run again in 2006, a decision “encouraged” by the GOP leadership of the era:

Welker has had a colorful run of it, and he said in an interview that powerful forces in the party, including Gov. Bill Owens, had asked him to step aside…

The representative, in office only three years, recently apologized on the House floor for an e-mail he forwarded to constituents and legislators that critics called racist. The e-mail contained negative characterizations of black victims of Hurricane Katrina made by a conservative black minister.

Welker created controversy last year by saying that if state law were changed to allow homosexuals to marry, it could lead to people marrying their pets.

In 2006, Welker’s racist and homophobic embarrassments were too much for Republicans, who feared–correctly as it turned out–that Welker’s out of the mainstream views would do further harm to the party’s already backward image well outside Welker’s district. GOP Gov. Bill Owens wielded enough influence to force his party to disown one of its own–a skill Colorado Republicans had lost by just a few years later, when Sen. Vicki Marble, Rep. Gordon “Dr. Chaps” Klingenschmitt, and a host of similarly freakish lawmakers made offenses like Rep. Welker’s routine occurrences.

The problem in this case is that although you might not remember Jim Welker, Sen. Cory Gardner most certainly does–having served with Welker after Gardner’s appointment to the Colorado House in 2005. Gardner was there when Jim Welker’s career was short-circuited in May of 2006. Not surprisingly, we couldn’t readily find any quotes from Gardner about Welker, but there’s no way Gardner can claim ignorance of him.

Either Gardner’s staff needs a remedial history class in Colorado politics, or Cory Gardner really is fine with rehabilitating a racist the Colorado GOP put out to pasture almost fifteen years ago. Maybe not as big a lift as Gardner walking back “I cannot and will not support someone who brags about degrading and assaulting women,” but it’s the same procedure.