Birtherism Is Back? If So, It Has Plenty of Precedent in CO 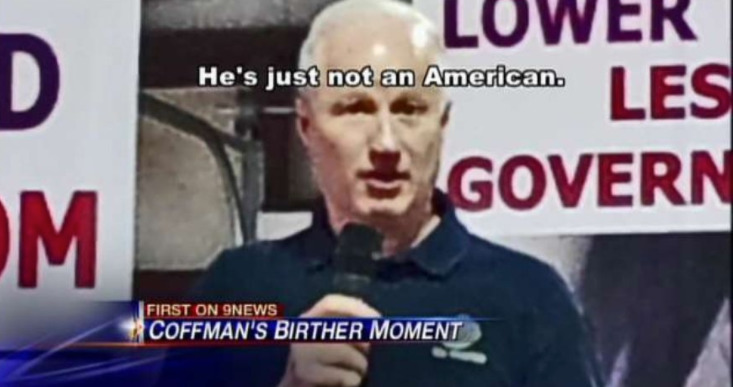 University of Colorado visiting scholar John Eastman landed in the national spotlight last week after speculating in a Newsweek op-ed that Democratic vice presidential candidate Kamala Harris might not be eligible to serve as vice president because her parents were possibly temporary visitors at the time of Harris’ birth.

Eastman, who’s attending a conference in Beaver Creek this weekend, later faced a national outcry denouncing him as a “birther,” in the mold of Trump himself who long promoted the falsehood that former president Barack Obama was ineligible to be president.

Colorado has seen birthers emerge repeatedly over the years, some apologizing some not, most recently in the form of Colorado Republican National Committee delegate Randy Corporon, whose views were profiled by profiled by CNN.

The new top RNC official in Colorado is a birther, who among other views said he didn’t think Muslims should be allowed to hold public office, speculated the Clintons murdered Scalia and Obama was a Muslim, said Bill Clinton had a black son, etc.https://t.co/8i2zk9zYxJ

By far the most memorable of Colorado birther’s, aside from talk-radio host Peter Boyles, was U.S. Rep. Mike Coffman (R-CO), who was caught at an Elbert County fundraiser 2012 saying he didn’t know if Obama “was born in the United States of America,” but that “in his heart, he’s not an American.”

After going into hiding when the comment was aired on 9News, Coffman was confronted on the street by 9News’ Kyle Clark. The Congressman apologized five times in a row, saying the same apologetic words (“I stand by my statement that I misspoke, and I apologize.”) unapologetically in response to five different questions from Clark, concluding with the query, “Is there anything I can ask you that you’ll answer differently?”

At the time, the U.S. Rep. Cory Gardner (R-CO) defended Coffman in a similar fashion as Coffman eventually defended himself, saying Coffman did the right thing by apologizing, but implying that the underlying frustrations that Coffman had toward Obama might somehow explain or justify Coffman’s birther moment.

Gardner himself had said previously that it was a legitimate opinion to believe Obama was not a U.S. citizen.

“The administration is trying to say he was born in this country,” reported the Fort Collins Coloradoan in 2009. But, when pressed, he said “we can’t disrespect people for having a different opinion.” Gardner eventually tried to walk back the comments.

In 2010, with birtherism still circulating in conservative media, perennial candidate Bob Beauprez was also willing to publicly entertain birther notions, telling a radio host, “On the birth certificate, I don’t know… I address it another way: if this guy is an American citizen, he’s a different kind of an American than virtually any that I know.”

One prominent Republican, Congressman Ken Buck, took a stand against birtherism, but only because the then-U.S. Sen. GOP primary candidate didn’t realize he was being recorded when he lashed out at birthers.

“Will you tell those dumbasses at the Tea Party to stop asking questions about birth certificates while I’m on the camera,” Buck said to the staffer. “God, what am I supposed to do?”

In response, the spokesman of Buck’s opponent, Jane Norton, said, “He’s a self-proclaimed Tea Partier who trashes tea partiers when he thinks no one is looking.”

So it made sense at the time that Buck had to apologize for calling birthers dumb asses–instead of saying they were, in fact, dumb asses. Buck explained that he too was just frustrated.

Birtherism could be found all over Colorado back then. Jefferson County Commissioner Donald Rosier shared a birther tweet of his own. In so doing, Rosier also legitimized a conspiracy theory that the Obama campaign threatened to kill Chelsea Clinton to keep the Clintons from exposing Obama. Yet despite being commissioner of a major metro Denver county, that post wasn’t egregious enough to get Rosier on to the Denver Post’s “Colorado’s 5 Most Passionate and Prominent Birthers” list of 2012.

With Obama out of office, it’s been relatively quiet on the birther front in recent years. With its recent resurgence due to Harris’ nomination and a Trump administration doubling down on anti-immigrant fearmongering, however, it could again play a role in this year’s election. Rosier, for example, is now a 2020 state house candidate.

Neither Rosier nor other Republicans stood up and cheered Eastman when he brandished his birther opinion last week. On the other hand, they didn’t denounce the professor either.

CORRECTIONS 8-29-20: Eastman believes Harris might be ineligible to be vice president because her parents might have been “temporary visitors” at the time of her birth, not because they were “immigrants,” as we initially reported. Also, since the publication of his op-ed in Newsweek, Eastman has not changed his position on Harris’ eligibility to be vice president, as we originally reported. He still believes, as he emailed us yesterday, “that if her parents had achieved citizenship status or lawful permanent resident status before her birth, then she would be eligible, but if her parents were only temporary visitors, then not.”