Swallowing Camels, Straining Gnats: Jesus Is In The Tank 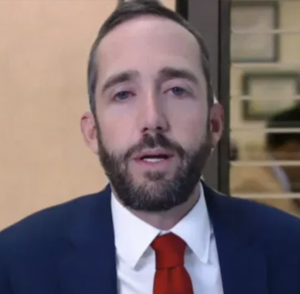 Last night, CBS4 political reporter Shaun Boyd interviewed one of the leading figures in the Republican/Evangelical Christian alliance that has dominated Colorado Republican politics for decades with even more tenacity than the all-powerful gun lobby–Jeff Hunt, director of the Centennial Institute, the political machination arm of the extremely well-funded Colorado Christian University. If you didn’t know, CCU is also a recipient of taxpayer dollars under Colorado’s controversial higher ed funding system known as the College Opportunity Fund.

The subject? How the faithful will vote in 2020, and as you can imagine, Jeff Hunt was wearing his well-worn MAGA hat! The story’s headline, Colorado Conservative Leader Expects MORE Evangelicals To Vote For Trump And Pence In 2020, says it all:

Jeff Hunt is a leader in the social conservative movement in Colorado, the so-called “values voters” you might expect to reject a materialistic, three-times divorced president who is prone to profanity.

Eighty percent of Evangelicals voted for Trump in 2016. Recent polls show his approval rating with them has slipped some, but remains high. [Pols emphasis]

One of the principal struggles for politically conservative Christians since 2016 has been supporting a President who, although he has undeniably advanced political causes they hold dear, has proven himself at tortuous length to be a completely amoral person whose religious convictions are an insulting grade of token at best. None of which troubles Jeff Hunt, who happily explains to Shaun Boyd that he’ll overlook all that stuff as long as Trump keeps delivering tax cuts and right-wing judges.

Boyd has emerged as a go-to for Republicans in Colorado looking for favorable spin and damage control, lately with respect to Sen. Cory Gardner’s flagging re-election campaign in much the same way as she ran at times obvious cover for Rep. Mike Coffman on his way out the door in 2018. In this case, however, Boyd is pretty blunt about the President’s moral failings–and Hunt is equally blunt about how none of that matters to him. That bluntness is quite informative, especially when Hunt turns to this year’s abortion ban measure as a turnout driver for Republican candidates first and desired policy second. Based on how previous anti-abortion measures have fared at the polls in Colorado, Hunt’s judgment on this point is questionable. But Hunt has no qualms about admitting to the real game, which is to turn out religious right voters.

The moral of the story…well actually, there isn’t one. Morals have, at best, a casual relationship.