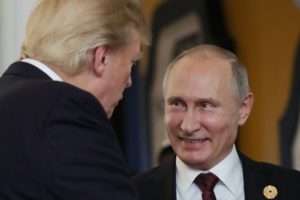 As The Washington Post and others are reporting, President Trump says flat-out that he didn’t even MENTION reports about Russia offering bounties on U.S. troops in a recent call with Russian President Vladimir Putin:

President Trump said in an interview broadcast Wednesday that he has not spoken to Russian President Vladimir Putin about U.S. intelligence reports of Russian bounties given to Taliban-linked militants to kill U.S. and coalition forces in Afghanistan.

“I have never discussed it with him, no,” Trump said during a taping of “Axios on HBO.” He said he did not bring up the issue during his most recent conversation with Putin, which occurred in the past week and which Trump said was “a phone call to discuss other things.” [Pols emphasis]

The Trump administration in recent weeks has questioned the veracity of the intelligence. But some of Trump’s own senior intelligence officials viewed the information as credible enough to warn the Pentagon and allies so they could ensure they had measures in place to protect their forces in Afghanistan and to begin developing options for responding to such a Russian operation, national security adviser Robert C. O’Brien said earlier in the month.

The president’s admission comes after he refused to divulge whether he discussed the Russian scheme with Putin when asked about the call Monday. Mr. Trump told reporters during a trip to Fujifilm Diosynth Biotechnologies in North Carolina that “we don’t talk about what we discussed” but called the conversation with Russia’s president “very productive.”

Here’s the full clip of the Axios interview with Trump that was first made public today:

Asked whether Trump should retaliate against Russia, Gardner said, “I think we should always go after people, whether it’s Russia or anyone else, who is trying to attack U.S. soldiers or interests.” [Pols emphasis] He noted he previously introduced legislation to declare Russia a state sponsor of terrorism.

We’ll update this post if Gardner says anything at all about this latest news on Trump’s refusal to even broach the subject with Putin. Just don’t hold your breath waiting for a response.