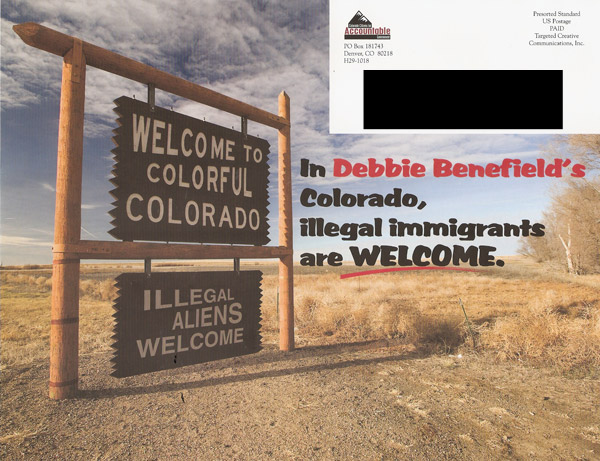 Incumbent Rep. Debbie Benefield of Colorado House District 29, defending her closely-divided suburban Jefferson County seat from Republican Robert Ramirez, is a good example of a state house Democrat besieged by an onslaught of negative “independent” expenditures. The mailing you see above, we don’t mind telling you, is quite upsetting in addition to wrong (Benefield supported the 2006 immigration special session, which passed significant, even controversial restrictions on illegal immigrants)–they’re screwing with one of our state’s most beloved symbols here. Do you remember the outcry a few years ago, when they tried to change our classic wooden “Welcome” signs with modern colorful ones? Only somebody in Virginia would think this is a good idea.

But just a few days after this piece hit mailboxes, two more mailers arrived from the same “Colorado Citizens for Accountable Government,” both on the same day according to the person who forwarded them–and in their zeal to carpet-bomb Rep. Benefield with every conceivable negative message, they appear to have screwed up pretty royally. See if you can spot it: 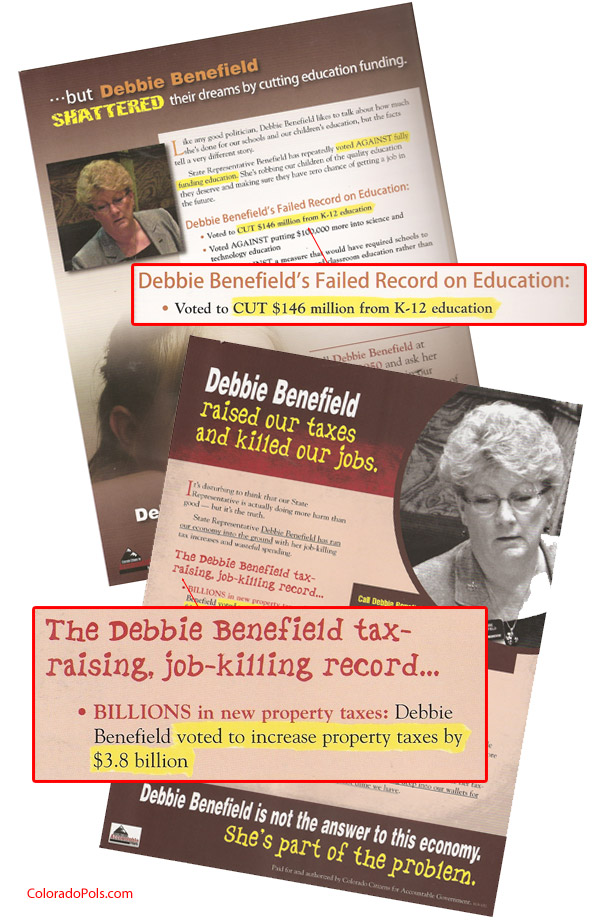 You can see that these two flyers attack Rep. Benefield over two seemingly opposed issues: one claims Benefield ‘shattered kids’ dreams’ by “cutting education funding,” and the other says she “killed our jobs” by raising taxes. Like most of the glossy mailers arriving in people’s mailboxes right now, none of these cite any sources for these claims.

But we do know exactly what Republicans mean when they say somebody “voted to raise property taxes by $3.8 billion.” That would be a reference to the mill levy freeze passed a couple of years ago–the “$3.8 billion” figure is meaningless, a dated ten-year projection from before the economy tanked. But every homeowner in Benefield’s district knows that property taxes fund schools.

So what will the undecided HD-29 voter do when they get two mail pieces, on the same day, from the same anonymous front group, attacking their representative both for cutting education funding and ‘raising taxes’ for education funding? Well, the first thing they’re likely to do is trash both mailers. Then they might get to thinking, ballot in hand, why somebody wants to take out Debbie Benefield so badly they’re willing to stuff every mailbox in HD-29 with contradictory nonsense.

This could produce a result other than “Citizens for Accountable Government” was hoping for.