UPDATE: Treasurer Cary Kennedy’s campaign jumps on the story in a release this afternoon (follows). Says spokesperson Serena Woods, “Coloradans need to know the facts, especially if Stapleton expects voters to trust him with 6 billion dollars of their money.” 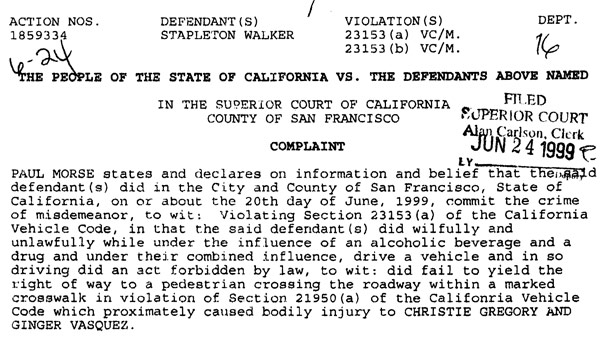 Bad news for GOP Treasurer candidate Walker Stapleton today–in a press release from the liberal coalition Campaign for a Strong Colorado, the court records from Stapleton’s DUI arrest in San Francisco ten years ago. The details of this arrest, which was briefly mentioned in a debate between Stapleton and Treasurer Cary Kennedy, appear to be considerably worse than what has been disclosed so far, including injured pedestrians. From Strong Colorado’s release:

Court records surrounding GOP Treasurer candidate Walker Stapleton’s DUI hit and run are in conflict with the candidate’s explanation of the accident. Stapleton in September admitted that he had a DUI in San Francisco in 1999.

Stapleton downplayed the incident during the September debate. He told the Denver Post that a cab ran a traffic light and hit him.

If that’s the case, there are several questions that remain unanswered:

·      Why did the SFPD charge Stapleton with DUI, hit and run and hitting pedestrians?

·      Why were the charges amended a month afterward to include leaving the scene of an accident without giving aid to the injured women?

·      Why did he not mention that two people were injured as a result of the accident?

·      Is he blaming the victims when they don’t have any ability to tell their side of the story?

San Francisco Superior Court records indicate that Stapleton was charged with DUI, and hit and run. A third charge of failure to stop and give aid to the injured women was added a month later. Stapleton pleaded guilty to DUI and served community service.

Here are the court records of the case as forwarded by Strong Colorado. There does appear to be a major gap between what Stapleton disclosed about this incident and the facts. In our experience, that tends to create a problem for aspiring candidates much worse than the bare facts themselves.

Which is not to understate those worsening bare facts. Pretty much any way you look at this, it’s really bad for Stapleton–the words “race-ending” seem perfectly appropriate.

“The court documentation posted on ColoradoPols.com does not match up with the statement Walker Stapleton gave to The Denver Post in their blog ‘The Spot’,” said campaign manager Serena Woods. “There are serious charges in these court documents that Walker Stapleton left the scene of an accident. He has an obligation to prove what really happened that night. Colorado voters deserve to hear from a third party who can verify the story.”

Walker Stapleton has already made false statements in other circumstances during this campaign. Just last week, The Denver Post and 9News each determined that a statement he made in his campaign ad is “false.”

“Coloradans need to know the facts,” said Woods. “Especially if Stapleton expects voters to trust him with 6 billion dollars of their money.”