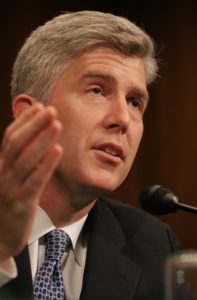 Politico helps us sort through another historic victory for LGBT Americans at the U.S. Supreme Court today:

The Supreme Court ruled Monday that the key federal law prohibiting discrimination in the workplace protects gay, lesbian or transgender employees from being disciplined, fired or turned down for a job based on their sexual orientation.

Writing for the court’s majority, Gorsuch accepted arguments that the Civil Rights Act of 1964’s prohibition on sex discrimination in employment also effectively banned bias based on sexual orientation or gender identity, even though few if any members of Congress thought they were doing that at the time.

“Those who adopted the Civil Rights Act might not have anticipated their work would lead to this particular result. Likely, they weren’t thinking about many of the Act’s consequences that have become apparent over the years, including its prohibition against discrimination on the basis of motherhood or its ban on the sexual harassment of male employees,” Gorsuch wrote.

It’s a decision being hailed as the most important victory for LGBT rights since the 2015 Obergefell v. Hodges ruling that invalidated state bans on same-sex marriage like Colorado’s Amendment 43 passed in 2006–and Supreme Court Justice Neil Gorsuch’s role not just in voting to uphold discrimination protections for LGBT Americans but writing the majority opinion for the decision is scrambling a fair number of political circuits this Monday morning. Not least in Gorsuch’s native state of Colorado, where despite fierce resistance to Gorsuch’s confirmation from the state’s progressive majority and a record of judicial decisions that certainly justified their concerns, today his opinion is being celebrated by many of Gorsuch’s former opponents.

Not so for the other Supreme Court Justice confirmed during the administration of President Donald Trump, Brett Kavanaugh, who sided with the court’s two longtime arch-conservative Justices Samuel Alito and Clarence Thomas to argue the losing opinion that employers should be allowed to fire LGBT employees. Where Gorsuch has Coloradans feeling unexpectedly proud, responsibility in Colorado for Kavanaugh’s throwback opposition on this historic question rests with just one politician, the only Coloradan to vote in favor Kavanaugh’s confirmation–Sen. Cory Gardner. Gardner hasn’t said anything yet about today’s decision, and we don’t expect him to lest he offend either one side or the other of the coalition he needs to have a chance at re-election.

All told however, in an era of political cynicism here is a moment to oblige even the most cynical to recalibrate.