President Donald Trump announced Saturday that he would not be quarantining New York City’s metro area, which has emerged as the nation’s largest hot spot for the coronavirus, after floating the idea earlier in the day…

Federal law gives the president and the federal government vast emergency powers in a pandemic, [Pols emphasis] including the ability to quarantine people to slow the spread of disease between states. But it’s not clear how the federal government would enforce what Trump described, and Cuomo and others questioned whether it would be legal.

I am giving consideration to a QUARANTINE of developing “hot spots”, New York, New Jersey, and Connecticut. A decision will be made, one way or another, shortly. 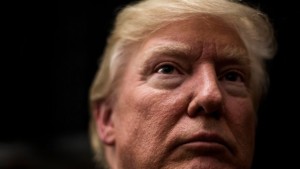 President Donald Trump said Saturday that he was considering an “enforceable quarantine” in the New York, New Jersey and Connecticut area due to the coronavirus outbreak, saying the decision could come as soon as later in the day.

“Some people would like to see New York quarantined because it’s a hot spot. New York, New Jersey, maybe one or two other places. Certain parts of Connecticut quarantined,” Trump said as he left the White House en route of Norfolk, Va. to see off the USNS Comfort, a Navy hospital ship that is headed to New York to provide extra hospital space to help fight the outbreak.

“I am thinking about that right now. We might not have to do it but there’s a possibility that sometime today we’ll do a quarantine, short term, two weeks, on New York. Probably New Jersey, certain parts of Connecticut,” Trump continued.

Now before you get your libertarian britches in a twist over what exactly an “enforceable quarantine” consists of, fear not–we have no doubt that the disgraceful number of Colorado Republicans who lashed out at Gov. Polis for his statewide stay-at-home order here in Colorado this week are busy right now working up an explanation for why Polis’ order is “tyranny,” but President Donald Trump shutting down three East Coast states equivalently Makes America Great Again™. We’re guessing it will fall somewhere between “East Coast libs have it coming” and “foreigners in New York all kiss each other.”

Much like Cory Gardner twisting into a pretzel to explain why the 2020 stimulus he’s proud of is nothing like the 2009 stimulus he rhetorically crucified President Barack Obama for, sometimes it would be better to just walk it back already. But somehow we doubt Gov. Polis’ excitable critics will be able to do so.