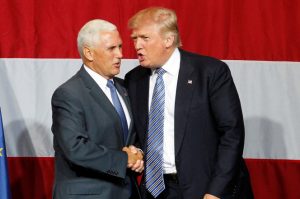 Listen, Mike, can you just tell this coronavirus thing to knock it off?

The Trump administration has not put the United States in a strong position to respond positively to the coronavirus outbreak. In recent years, Trump has disbanded groups formed to handle disease outbreaks such as Ebola, and has proposed cutting the parts of the budgets at NSC, DHS, and Health and Human Services designated for fighting global disease.

President Trump has taken to blaming Democrats and the media for inciting fear about coronavirus, while his own musings on the topic have coalesced into a blind hope that everything will probably be fine.

As Stephen Collinson writes for CNN:

President Donald Trump is hoping for a “miracle” that will make the coronavirus disappear but tanking stock markets and signs the disease is stalking America are delivering their verdict on his scattershot management of the crisis.

A historic Wall Street sell off, the first case on US soil that could not be traced to travel to countries battling the virus, and news of drug shortages outpaced White House efforts to show everything was under control.

“It’s going to disappear. One day it’s like a miracle, it will disappear,” Trump said at the White House Thursday as the virus marched across Asia and Europe after US officials said the US should brace for severe disruption to everyday life.

The President also warned that things could “get worse before it gets better,” but he added it could “maybe go away. We’ll see what happens. Nobody really knows.” [Pols emphasis]

The Trump administration is so spooked by the coronavirus that they have implemented new rules requiring public health officials to get clearance from the White House before appearing in on-camera interviews. Trump is using Vice President Mike Pence as a human shield in case things go wrong; appointing the former Indiana Governor to head up the U.S. coronavirus response makes about as much sense as putting Pence in charge of selecting the playlist for a dance party. And where is Pence today? He’s in Florida, raising money for the Republican Party.

For once, we can’t disagree with President Trump; we certainly hope that the coronavirus is just “going to disappear.” But hoping for a miracle is not good public policy.