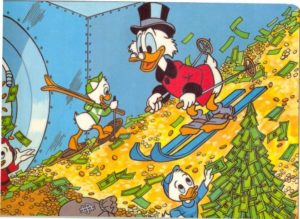 We’ve noted at length in this space that creating a “public option” for health care in Colorado will be perhaps the biggest fight of the 2020 legislative session. Governor Jared Polis has made a “public option” a priority for his administration (check out this interview with Polis for more detail), and the health care industry is already spending hundreds of thousands of dollars on television ads and direct mail complaints in an effort to get ahead of the debate and sway public opinion.

The health care industry and “Big Hospital” (also known as the Colorado Hospital Association) have a tough task ahead of them; recent polling shows strong support for a “public option” in Colorado, and a new study released last week examines just how much Coloradans are getting gouged by the health care industry. As The Denver Post reported on Thursday:

Despite money from the state to make up for funding shortfalls and increases in Medicaid payment rates, hospitals — not the providers — are making billions in profits while forcing patients to pay more, according to a report released Thursday by the Colorado Department of Health Care Policy and Financing…

…The report argues that hospitals are facing less of a shortfall than they did a decade ago because fewer people are uninsured and the state has increased Medicaid reimbursement rates and created other mechanisms to fund shortfalls. Lt. Gov. Dianne Primavera said the state expected hospitals to stop shifting so much of their costs onto people with private insurance as their shortfall went down, but instead they’ve increased spending on executives and middle men.

The shiniest numbers in the state report show that hospital profits nearly tripled in the last decade, rising from an average of $538 per patient in 2009 to $1,518 in 2018. The Colorado Hospital Association responded to these figures with some carefully-ordered but generally meaningless words:

The hospital association said the profits the state cited don’t into account some of their costs, like taxes and the value of time spent training medical residents. It also attributed much of the increase in profitability to a strong economy and to improvements in vulnerable hospitals’ finances.

“(Profit) margin improvement is also due to hospitals working to control their costs as they work to address affordability and operate during a time of great uncertainty,” the statement said.

The health care industry doesn’t have a lot to say here in part because other studies have come to similar conclusions; a separate report from the Health Care Cost Institute showed prices for inpatient hospital services in Denver and Colorado Springs far outpacing nationwide increases.

If the Colorado Hospital Association plans to keep on yammering about “profit margin improvement” while regular Coloradans are discussing the fact that they can’t afford health care, the “public option” debate may be more one-sided than anyone could have predicted.