We wanted to take note of a primary challenge reportedly brewing in Colorado House District 15, the infamously nut-tolerant Colorado Springs safe GOP seat once held by Gordon “Dr. Chaps” Klingenschmitt and currently in the possession of Rep. Dave Williams. Williams, who trades on a charming amalgam of Latino heritage and virulent anti-immigrant demagoguery, has always had a less than firm grip on this seat on account of being generally an unpleasant individual–and now, GOP challenger Missy Ward is taking on Williams in a red-on-RMGO proxy war:

It took less than three days after filing to run for State House Representative of HD 15 for the threats from RMGO and their puppets to begin.

An elected official called to tell me that RMGO, Joe Neville and Jon Hotaling are already working their bully tactics against me.

This is exactly what I expected from this group of radical, women hating, abusers.

They SHOULD be threatened by a smart, independent woman and domestic abuse survivor like myself that refuses to be their pawn.

Today, Williams’ supporters were found spreading this message to attendees at the conservative protest rally outside the state capitol: 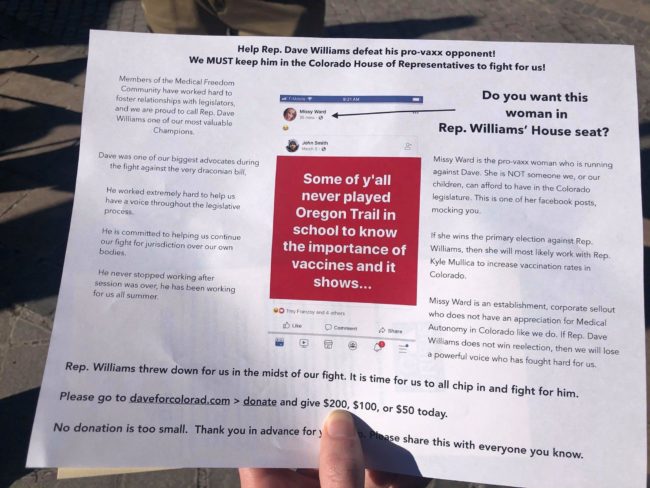 To the overwhelming majority of Americans who support vaccination and think the law should be much tougher in terms of requiring school-age kids to get their shots, being labeled “pro-vaxx” would be rightly considered a compliment. But it’s crucial to remember that in a GOP primary in a safe GOP seat, the sensibility of the majority counts for basically nothing. Rep. Williams has clearly determined that becoming the face of “anti-vaxxer” politics in Colorado is his ticket to political survival.

And as bad as that may be for the Republican brand outside those super-safe districts, he could be right.