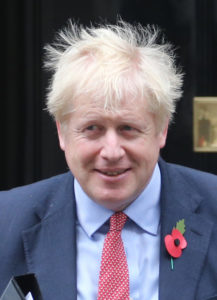 Yesterday, an historic election across the pond in the United Kingdom delivered Conservative bad-hair Prime Minister Boris Johnson a resounding victory over a wilted rose of a Labour Party, paving the way for Johnson to keep his promise to “get Brexit done” and maybe, or maybe not, having some portent in the upcoming 2020 U.S. presidential election. CNN’s Chris Cillizza opens the stateside speculation thusly:

Within 12 hours of the confirmation of the Conservative victory, the result was already being analyzed in the United States for signals of what it all might mean for the coming 2020 presidential election. President Donald Trump, in a press availability Friday afternoon, suggested Johnson’s victory over the liberal Labour Party led by Jeremy Corbyn was a telling signal of his own future political prospects…

The parallels between Cornyn’s proposed policy solutions and those offered by liberals like Sens. Bernie Sanders (Vermont) and Elizabeth Warren (Massachusetts) — most notably in their firm backing of “Medicare for All” are clear. Which is a point that the more moderate –they would say “pragmatic” — candidates in the 2020 race sought to make in the way of the UK results.

At a fundraiser on Thursday night, former Vice President Joe Biden took note of Johnson’s victory and predicted headlines that said: “Look what happens when the Labour Party moves so, so far to the left. It comes up with ideas that are not able to be contained within a rational basis quickly.”

As a referendum on Brexit, the U.K.’s halting but still pending separation from the European Union driven by conservative worries about immigration and revenue liabilities to poorer countries, yesterday’s elections don’t have a clear axis of comparison to American politics, where the last election in 2018 dealt Republicans major defeats and the party is broadly perceived to be saddled with the baggage of an unpopular President.

Despite this, moderate Democrats will undoubtedly see in these results apprehension to an ambitious liberal agenda as championed by socialist Bernie Sanders and to a more measured extent by Elizabeth Warren. By all accounts the Labour Party ran on a public investment platform as much or more than providing an alternative to Brexit, and British voters either weren’t moved by that platform or too preoccupied with Brexit to care.

If the results of the U.K.’s election spook Democratic primary voters into moderating their selection, Joe Biden is the clear beneficiary. After three years of reactionary chaos under Donald Trump, under this line of thinking, what American voters want is stability more than countervailing leftward stridency.

You have the floor, readers. What lessons, if any, are to be learned from Boris Johnson’s big win?