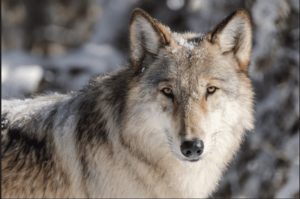 A press release today from the Rocky Mountain Wolf Action Fund announces the delivery of over 210,000 petition signatures to the Secretary of State, in support of a statewide ballot measure in 2020 to reintroduce wolves to Colorado by 2023:

“Colorado voters have made clear once again that they enthusiastically support restoring the natural balance to Colorado’s wild public lands.” said Rob Edward, President of RMWAF, the lead organization behind the initiative. “The enthusiastic response from voters all across the state to this initiative is not a surprise, since poll after poll during the past 20 years has shown that Coloradoans want to bring back the wolf.”

This is the first time that reintroduction of an endangered species has been initiated through a direct vote of the people. The initiative instructs Colorado Parks and Wildlife to develop, after public input, a science-based plan for reintroducing wolves to Western Colorado by 2023. It also directs the Colorado General Assembly to develop a means to compensate ranchers for the small number of livestock that could potentially be lost to wolves each year.

Edward added, “A recent poll commissioned by the RMWAF showed over two-thirds of Coloradans, including majorities in the Western Slope as well as the Front Range, support reintroduction.”

“This wolf reintroduction initiative is the ground-breaking manifestation of that public support, marrying wildlife conservation and direct democracy,” said Edward.

Dr. Joanna Lambert, a professor of environmental studies and evolutionary ecology at the University of Colorado, underscored the fact that Initiative 107 has national significance, given that over 70% of Western Colorado belongs to the American public as national forests, national parks, and other public lands. “In November 2020, Colorado will show the nation what stewardship looks like,” Lambert said.

The reintroduction of wolves to Colorado would complete an unbroken line from Canada to Mexico where the animals are being returned to their formerly native range. Today gray wolves occupy only about 10% of their original range in the lower 48 states. Proponents say that isolation of wolf populations, particularly in New Mexico, threatens their genetic diversity. The goal is to restore a healthy “interconnected population” of wolves throughout North America.

Opposition to this initiative is expected to come from ranchers as well as some hunting interests, and it’s certainly true that wolf reintroduction has been politically fraught in other states. To address those concerns, the initiative includes a compensation plan for livestock losses to reintroduced wolves, expected to pay out less than $50,000 per year based on experience in other states. In terms of hunting, reintroduction of wolves to states north of Colorado suggests that the worst fears have not materialized, that habitat destruction is impacting elk populations far more than wolves, and wolves are helping create healthier game herds by culling weak and sick animals. In the final analysis, the wolves face threats from us, but we don’t face a meaningful threat from them.

This will be an interesting initiative to watch, since it gives the public the chance to weigh in directly on environmental policy normally made by elected officials and political appointees. It may well be that a majority of voters find welcoming wolves back to Colorado an easy call, and that would be a politically significant outcome on a range of related issues.