“No You Don’t” Have to Vote for “Weenie” Gardner, Says Talk Radio Host Boyles 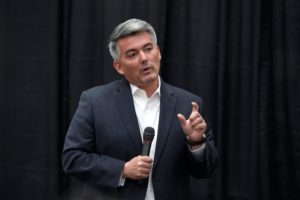 To fully understand the squeeze U.S. Sen. Cory Gardner (R-CO) faces in Colorado, you need to tune to one of the many conservative talk radio shows in the state.

Here’s what you would have heard on KNUS’ Peter Boyles yesterday.

Caller: “What makes me the most angry is, I hear some of the other Republicans on the radio and everywhere else telling me that, when it comes to Cory Gardner, I need to swallow that pill and vote for him.”

Caller: “But yet at the same time, these guys will not support President Trump. And I’m like, ‘How am I supposed to swallow the pill to vote for somebody who is basically a sellout, and yet you guys won’t stand behind Donald Trump because you know what the alternative is. It’s a Catch 22. It’s a double standard that they set for me, but they don’t want to follow it for themselves when it comes to supporting Trump.”

Boyles: “That’s the gimmick that they say to me all the time. I say no. You could turn Cory Gardner into a candidate…. Right now, he’s a weenie. He really is a weenie. He can just stand there and be a pretty little boy too, but guess what. That’s not Trumpian.”

What to do about this kind of thinking, if you’re Gardner?

He’s got to win over independent voters in Colorado, who account for over a third of the electorate. Overall, they hate Trump, who has a “less than zero” chance of winning here next year, according to failed Rep. Coffman’s campaign spokesman, who’s credible on this.

Independent voters don’t want to hear Gardner praising Trump like he’s been doing, by voting with him 90% of the time, inviting him to campaign here, wanting you to just get to know the president, and refusing to criticize Trump’s Trumpian behavior (Ukraine, obstruction of justice, attacks on the press, women, civil servants, intelligence services).

But Gardner’s overarching but sometimes muted praise of Trump, and his restraint in denouncing the president’s extremism, sounds like weeniness to the talk radio crowd, like Boyles, who reach a small audience but represent the Republican base.

If Gardner does what his base wants, he loses the independents. If he criticizes Trump, then he loses the boots, if not the votes, of his activists.

So what does Gardner do. Mostly these days, he’s silent on the issues that matter most.