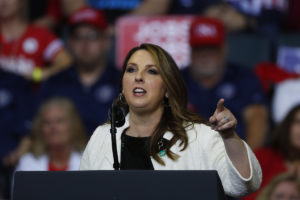 CBS News reports on fresh scandal ensnaring the Republican National Committee, a problematic timeline of very large donation requests to a California billionaire hoping to become the next ambassador to the Bahamas:

A CBS News investigation has uncovered a possible pay-for-play scheme involving the Republican National Committee and President Donald Trump’s nominee for ambassador to the Bahamas. Emails obtained by CBS News show the nominee, San Diego billionaire Doug Manchester, was asked by the RNC to donate half a million dollars as his confirmation in the Senate hung in the balance, chief investigative correspondent Jim Axelrod reports…

To briefly summarize CBS’ reporting, San Diego billionaire Doug Manchester was nominated right after President Donald Trump took office to be the next ambassador to the Bahamas. No action taken by the Senate to confirm Manchester for over two years. After Manchester organized a relief flight to the Bahamas following Hurricane Dorian, Manchester received a favorable Tweet from Trump, followed three days later by a request from RNC chairwoman Ronna McDaniel for $500,000 “from your family”–in implicit acknowledgement that Manchester himself as an nominee awaiting confirmation by the Senate could not ethically do so.

Three days after the tweet, RNC Chairwoman Ronna McDaniel hit up Manchester for a donation. It was no small sum. In an email, obtained exclusively by CBS News, she asked Manchester, “Would you consider putting together $500,000 worth of contributions from your family to ensure we hit our ambitious fundraising goal?”

This is a prime example of what’s known in the business of politics as “corruption.” And Manchester was ready to play ball:

The Senate confirmation process is exactly what Manchester quickly addressed. He wrote back to McDaniel’s request for $500,000, “As you know I am not supposed to do any, but my wife is sending a contribution for $100,000. Assuming I get voted out of the [Foreign Relations Committee] on Wednesday to the floor we need you to have the majority leader bring it to a majority vote … Once confirmed, I our [sic] family will respond!” [Pols emphasis]

In the wake of this email exchange, in which Manchester reportedly cc:ed a Republican Senator who then tipped off the White House, Manchester withdrew his nomination for “personal reasons.” But it shouldn’t end there: Ronna McDaniel’s request for Manchester to organize a $500,000 contribution from family members tacitly recognizes that the request was inappropriate. In any ordinary political environment, McDaniel would be clearing out her office immediately following publication of this story.