UPDATE: So, what happens when EU Ambassador Gordon Sondland testifies publicly, which could come as soon as next week? 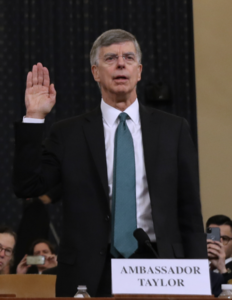 William Taylor, acting ambassador to Ukraine, during the swearing-in process prior to House testimony.

William B. Taylor Jr., acting ambassador to Ukraine, opened up the first day of public impeachment hearings in front of the House Intelligence Committee today with a bombshell bit of new information. As The Washington Post explains:

Taylor added new information to his opening statement Wednesday, describing a July phone call between Trump and U.S. ambassador to the European Union Gordon Sondland overheard by a member of Taylor’s staff in which Trump purportedly asked about “the investigations.”

Taylor said one of his aides told him that Sondland called Trump from a Kyiv restaurant on July 26 to update him on meetings he was having in the city.

The aide heard Trump through the phone asking about “the investigations” and Sondland said the Ukrainians were ready to move forward, according to Taylor.

The phone call purportedly took place after Sondland met with Andriy Yermak, a top aide to Zelensky, and one day after Trump asked Zelensky to pursue investigations into his political opponents in a controversial phone call.

As CNN notes, “Bill Taylor’s opening statement is a wow.”

George Kent, a deputy assistant secretary at the State Department, joined Taylor in testifying this morning.