Dumbest Solution In Search Of Problem Ever Heads For Ballot 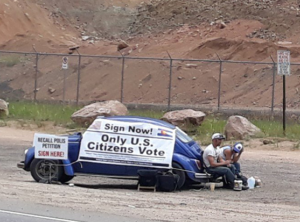 Colorado Public Radio’s Andrew Kenney reports, here’s an exciting new way Republicans have found to make differing groups of people who live in America dislike one another–which history has shown has a measurable effect on how Americans vote!

The national group Citizen Voters has poured more than $1 million into an attempt to change a few words in Colorado’s state constitution.

It’s part of a well-funded, multi-state campaign to explicitly ban anyone without U.S. citizenship from voting in elections, which critics say is already part of Colorado’s existing law. Organizers say they’re on track to get on the ballot for the 2020 election.

The Colorado effort has collected more than 200,000 signatures ahead of a Tuesday deadline, likely ensuring they’ll have more than enough ruled valid to qualify for the election, according to Joe Stengel, registered agent for the initiative.

“Only people eligible to vote by virtue of being a citizen should be allowed to vote. This will ensure that will take place,” said Stengel, a former Republican state legislator from Littleton.

Let’s start with the most important thing people need to know about the so-called “Citizen Voter” initiative, which assuming the petition drive in support of placing this measure on the November 2020 ballot was carried out professionally–no guarantee of course with the shady characters involved in paid signature collection efforts–we’ll be voting on.

It’s already the law that only U.S. citizens can vote in Colorado elections. It’s the law two ways, in fact, via federal law pertinent to every federal office as well as the state constitution which explicitly makes citizenship a requirement to vote.

The state constitution says that “every citizen” may vote, and Initiative 76 would change it to say that “only citizens” may vote. [Pols emphasis]

In terms of practical effect in any Colorado election, this change would be completely meaningless. Although some local governments in other states have allowed for noncitizens to participate in low-level elections like school boards where federal election laws do not apply, that can’t happen in Colorado under the state constitution.

So why spend the money and man-hours to pass a constitutional amendment that changes nothing? That’s simple: it motivates conservative voters, who believe against all available evidence that election fraud in general and noncitizen voting in particular is rampant throughout the country. Here in Colorado, former GOP Secretary of State Scott Gessler tried for years to persuade the public that “tens of thousands of illegal voters” were swinging our elections. Gessler’s initial claims of tens of thousands dwindled down to something around a half dozen cases, since Gessler omitted basic considerations like the thousands of people who became citizens during the same period–more than accounting for Gessler’s fictional discrepancy.

We’ve always assumed that Gessler knew he was being dishonest. Likewise it’s reasonable to assume that the proponents of this initiative are fully aware that it would make no practical difference in the law. This is about showing token support for President Donald Trump’s virulently anti-immigrant agenda, and stoking the ugly anti-immigrant animus Trump has capitalized on since the moment he entered the presidential race in 2015. For this to be happening at the same time as the U.S. Supreme Court’s battle over “DREAMer” immigrant children makes for a compelling backdrop, and not in any way that makes the measure’s proponents look good.

One can only hope that the same Colorado voters who rejected Trump’s demagoguery will see through this as well.